Palace: DAP use is legal, constitutional 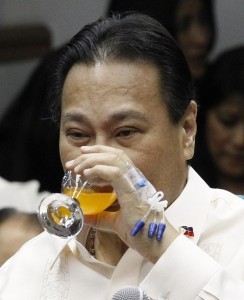 Supreme Court Chief Justice Renato Corona, with a hep-lock attached to his hand, drinks soda during his impeachment trial at the Senate in Manila May 25, 2012. The Philippines’ top judge returned to the witness stand at his own impeachment trial to deny concealing 45 properties and millions in assets and denounce a case President Benigno Aquino sees as key to rooting out corruption. Corona, chief justice of the 15-member Supreme Court, was installed by Aquino’s predecessor, Gloria Macapagal Arroyo, who herself faces election fraud and corruption charges. Corona had left the witness stand during his impeachment trial on May 22, 2012 and was hospitalised after his blood sugar dropped sharply according to his lawyers.(MNS Photo)

MANILA (Mabuhay) – The use of the controversial Disbursement Acceleration Program (DAP) is within the bounds of the law and the Constitution, Palace officials said Thursday.

Communications Secretary Ricky Carandang said DAP, which is just realigned savings, was also being used during the previous administrations.

“Marami nalilito sa term na DAP. If you strip it of the name, it’s realigned savings which is done by previous administrations but with less transparency,” Carandang said at a media briefing.

He said the savings in 2011 and 2012 were re-channeled to stimulate the economy and DAP was intended for projects that require acceleration spending.

“This government has announced magkano ang savings at saan dadalhin. This is just a realignment of savings. Sinasabi ng mga lawmakers na hindi nila alam ang DAP but they’re aware na may savings… Every realignment under DAP was legal and there is legal basis for that and it’s a practice being done for years,” he added.

Carandang was reacting to statements from former Budget head Benjamin Diokno who said the Palace may have violated the Constitution when it used DAP to fund new projects.

Constitutionalist Father Joaquin Bernas also said Congress can only authorize the President to transfer savings to augment funds in the same department.

Unlike the practice of previous administrations, Carandang assured that the Aquino government is transparent in the use of DAP, a “mechanism” to accelerate spending.

He said DAP is not an item, that’s why it is not included in the General Appropriations Act.

“It has to conform to restrictions under the law and that’s what we’ve done. We can be assured, magkakaroon ng audit at malalaman natin. Sa ngayon wala tayong nakikitang anomaly. Hintayin natin ang COA [Commission on Audit],” Carandang said.

COA is conducting an audit into the use of DAP. The Palace hopes that COA will release its audit findings sooner.

While the Palace recognizes the public outrage on the misuse of public funds, Carandang argued that the use of DAP itself is a non-issue.

“Right now, there are no allegations of misuse of DAP… If the money is being used properly, wala naman magrereklamo. The objection comes when money is allocated and somehow is misused. That’s what we should focus on,” Carandang said.

Carandang also said no one is accusing former senator Joker Arroyo of misusing his funds.

Arroyo was surprised that his name was allegedly included on the list of senators who supposedly received DAP funds in 2012 when he was not even aware that such exists.

He said he did not ask for DAP funds but for an amendment in the proposed 2013 budget for the construction of classrooms and hospitals amounting to P47 million.

“His projects were funded from savings from DAP and they were on the menu. No one is accusing Senator Arroyo of misusing his funds,” Carandang said.

Meanwhile, Presidential Spokesperson Edwin Lacierda also denied that the funds went directly to the lawmakers. He said the funds were directed at implementing agencies, contrary to Senate President Franklin Drilon’s admission that he received P100 million in DAP funds.

Arroyo insisted that he had suggested amendments – or “insertions” – when the 2013 was being deliberated in Congress late last year, to cover social-service requests from his constituents.

“We do not do congressional insertion. We’ve taken that away. Alam niya as a policy, we don’t allow insertions,” Lacierda said.

On the one hand, Lacierda said Arroyo should be thankful that his projects were funded.

“Isn’t he happy the projects he requested we funded?” he said.

The DAP has become the center of controversy after Senator Jinggoy Estrada bared in a privilege speech the “incentives” of P50 million to each senator who voted to convict Justice secretary Renato Corona.

Budget Secretary Florencio Abad later admitted giving from P50 million to P100 million to each senator under the DAP but denied it has any connection with the ouster of Corona. (MNS)