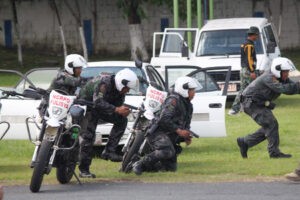 Members of the Quezon City Police District -Tactical Motorized Units hold a rehearsal on tactical convoy at Camp Karingal in Quezon City on Friday. The group is currently preparing for the upcoming APEC Summit on November 16-19 in Manila, where cops will be securing and escorting foreign delegates.(MNS photo)

MANILA (mabuhay) – Malacañang on Friday denied the allegation that it plans to hide street dwellers from the view of state leaders attending the Asia-Pacific Economic Cooperation (APEC) Summit from November 16 to 20 .

Quoting Social Welfare and Development Secretary Dinky Soliman, the Palace denied that the department is giving out P4,000 to the homeless to rent temporary homes while the APEC summit is ongoing.

Deputy presidential spokesperson Abigail Valte said all initiatives for the homeless of the agency are under their regular programs.

Manila Auxiliary Bishop Broderick Pabillo on Thursday criticized the government for its supposed plan to hide street dwellers during the APEC Summit by giving them money to rent a temporary home.

Instead of providing permanent solutions to the plight of the poor, the government just conceals homeless families every time there are visitors to the country, Pabillo said in a radio interview.

The DSWD was also heavily criticized back in January when it brought street dwellers to a luxurious resort in Batangas during the five-day visit of Pope Francis.

The department, for its part, denied hiding poverty from the Pope, insisting that the “family camping” was part of the government’s modified CCT program.