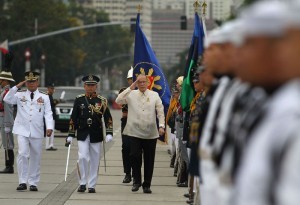 President Benigno Simeon Aquino III, accompanied by Armed Forces of the Philippines Chief of Staff General Gregorio PioCatapang, Jr., troops the line during the full military honors accorded him upon arrival for the commemoration of the 118th anniversary of the martyrdom of Dr. Jose Rizal at the Rizal National Monument in Rizal Park, Manila City on Tuesday (December 30), with the theme: “Rizal 2014: Dunong at Pusong Pilipino.” (MNS photo)

MANILA, Jan 3 (Mabuhay) – The Department of National Defense will be ready to address observations raised by the Commission on Audit regarding its P352.5 million in emergency funds.

Deputy presidential spokesperson Abigail Valte said the DND is ready to give its “appropriate response” to the audit observation raised by the COA.

A report in the Philippine Daily Inquirer said the COA report indicated the military may have misused a big part of P352.5 million in emergency funding.

The report said COA findings indicated the military may have spent money meant to help victims of natural disasters for its fuel consumption and repairs of its offices.

Citing the COA findings, the report said P843.5 million in Quick Response Fund (QRF) of the DND remained unliquidated since 2012.

But it also quoted the DND as saying the emergency fund was “utilized for the purpose it was released to DND.”  (MNS)

No survivors in Philippines landslide