Palace exec to China: Be more friendly to PHL 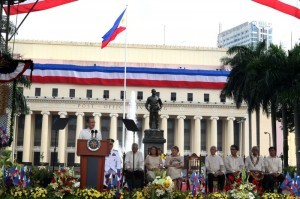 President Benigno S. Aquino III leads the 115th Philippine Independence Day celebration at Liwasang Bonifacio Wednesday morning, (June 12). In his speech, the President is determined to continue, in a peaceful way, to fight for the protection of the country’s sovereignty. (MNS photo)

MANILA (Mabuhay) – Be more friendly to the Philippines.

This seemed to be the message of Malacañang after China denounced Vietnam and the Philippines for getting together on a disputed island in the South China Sea to play soccer and volleyball, calling it “a clumsy farce” and demanded both countries stop causing trouble.

“Instead of condemning the friendly games between the Philippines and Vietnam, China should focus on engaging the Philippines in friendly initiatives,” presidential spokesperson Edwin Lacierda said in a text message Tuesday.

Lacierda said the Philippines, for its part, even observed the 13th Filipino-Chinese Friendship Day on Monday.

China and the Philippines continue to be embroiled in a territorial dispute over parts of the South China Sea.  Manila has elevated the matter to a United Nations tribunal, a move which China rejected.

Despite this, Lacierda said the country will “continue to resort to the diplomatic track.”

“Certainly, we do not want to escalate any tensions in the South China Sea. That is not what we are there for and, therefore, the best thing that we can do is to resort to the diplomatic mechanism,” he said during a press briefing on Monday.