Palace: National Museum to coordinate with parties on WW2 shipwreck off Romblon 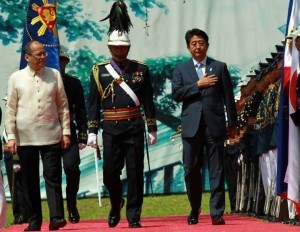 President Benigno S. Aquino III and His Excellency Shinzo Abe, Prime Minister of Japan, review the honor guards during the Arrival Ceremony at the Malacañan Palace Grounds for his Official Visit to the Republic of the Philippines on Saturday (July 27, 2013). The visit of Prime Minister Abe will further advance the Strategic Partnership between the Philippines and Japan. The last time that the prime minister of Japan visited the Philippines was in December 2006 when Prime Minister Abe visited Manila during his first term as the head of the Japanese Government. Japan is one of only two strategic partners of the Philippines. In 2012, Japan was the Philippines’ number one trade partner and provider of official development assistance as well as the second major source of approved investments and third source of tourist arrivals. (MNS photo)

“At this point, the National Museum is at least trying to contact them to coordinate … under jurisdiction nila ito,” she said on government-run dzRB radio.

She also urged the public to allow the National Museum to coordinate with the group of Microsoft co-founder Paul Allen, whose group discovered the supposed wreck.

When asked if Philippine laws will apply in this situation, she said, “yes,” adding this is an underwater archaeological find.

Besides, she said this is not the first time involving such wreckage.

“A dozen Japanese warships have been found in various places in the Philippines,” she said.

Valte also indicated the ship is not likely to be surfaced.

“Nagiging dive site, at least in the case of the first 12 found within the country,” she said.

But he said that as of Friday, the provincial government was not informed about the group’s exploration.

“Even the Philippine Coast Guard and the Philippine Navy were also unaware about the exploration conducted. Since there may be artifacts which are historically significant, government institutions like the National Museum and the National Historical Commission of the Philippines (should have been) informed,” he said.

“Being a Japanese vessel, it is also proper to inform the embassy of Japan. As reverence to their fallen soldiers, there may also be ways how to regard the issue with utmost traditional sensitivity. We hope that national laws and international protocols be observed for proper coordination and collaboration,” he added. (MNS)

2016 Toyota Land Cruiser: A luxurious bridge between civilization and adventure