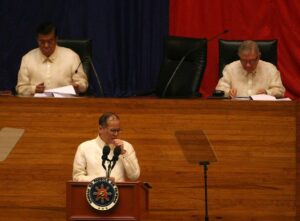 President Benigno Aquino III clears his throat as he delivers his fifth State of the Nation Address at the start of the second regular session of the 16th Congress on Monday, July 28. (MNS photo)

MANILA, Apr 6 (Mabuhay) — Malacañang should work double time to arrest the dramatic plunge in President Benigno Aquino III’s satisfaction rating before he delivers his last State of the Nation Address (SONA) in July to keep the public from totally losing confidence in him as his term ends, a political analyst said.

Failure to reverse the decline might diminish the value of his endorsement for the 2016 elections, Professor Prospero de Vera III of the University of the Philippines National College of Public Administration and Governance (UP-NCPAG), said on Monday.

The latest Social Weather Stations’ (SWS) survey showed President Benigno Aquino III’s net satisfaction rating has dropped to +11 in the first quarter of 2015, down 28 points from December. The survey results meant the President garnered a “moderate” rating, compared with a “good” +39 in December.

The latest survey results reflect the lowest satisfaction rating for the President since he assumed office in 2010, according to SWS.

This is a cause for concern, De Vera said, noting former presidents, including Aquino’s predecessor, incumbent Pampanga Rep. Gloria Macapagal Arroyo (GMA), experienced such a predicament.

A March 2010 SWS survey showed the public dissatisfaction with Arroyo deteriorated from “bad” to “very bad” on a net satisfaction rating of -53.

The professor believes the 28-point decline in Aquino’s net satisfaction rating could have been averted had his team did a more thorough analysis of how to handle the Mamasapano debacle, as the worst crisis to impact on his presidency.

De Vera said it would have helped had the President immediately apologized for the Jan. 25 tragedy, which claimed the lives of over 60 individuals that include 44 Special Action Force (SAF) troopers.

Aquino has not issued an apology for the Mamasapano debacle. Instead, he appealed to Filipinos for understanding regarding his actions. (MNS)

Add a Fresh Twist to Taco Night With Seafood