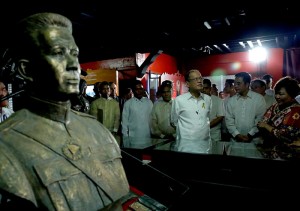 President Benigno S. Aquino III tours and the facilities of the Museo ni Emilio Aguinaldo during the inauguration ceremony at the Emilio Aguinaldo Shrine in Kawit, Cavite on Friday (March 20). The museum chronicles the life and times of Aguinaldo, especially during the revolution against Spain and war against the United States. Also in photo are National Historical Commission of the Philippines chairperson Dr. Maria Serena Diokno and Transportation and Communications Secretary Joseph Abaya. (MNS photo)

MANILA (Mabuhay) – Malacañang on Saturday said it has no information on the reported resignation of Chief Presidential Legal Counsel Benjamin Caguioa.

It said Caguioa “wants to focus on his private law firm.”

Caguioa, who replaced Eduardo de Mesa in January 2013, was a classmate of the President at the Ateneo de Manila University.(MNS)