Palace on Poe’s disqualification: Sobriety, respect for law must prevail 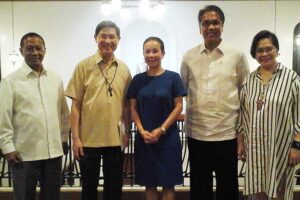 MANILA (Mabuhay) – Malacañang on Wednesday appealed for sobriety and respect for law among all concerned parties following a decision of the Commission on Elections’ (Comelec) Second Division to disqualify Sen ator Grace Poe from the 2016 presidential race.

“We understand that Senator Poe’s legal counsel will pursue and exhaust all remedies available to them, as is their right in this process. We believe that sobriety and respect for the law and its processes are the best way forward for all parties concerned,” said presidential spokesperson Edwin Lacierda.

Lacierda noted that the decision was arrived at “in the course of the constitutionally-mandated functions of the Comelec.”

The poll body’s Second Division sided with petitioner Estrella Elamparo who sought the cancellation of Poe’s certificate of candidacy for failing to meet the 10-year residency requirement as mandated by the Constitution.

The Comelec division said Poe, who has been leading presidential preference surveys over the past several months, became a resident only on July 2006 when she applied for dual citizenship, or two months short of meeting the 10-year residency rule.

The division also said Poe “deliberately attempted to mislead or misinform the electorate or hide a fact from them when she supplied the answer ‘10 years and 11 months’ to the question” on her period of residence in the Philippines in her COC.”

Poe said she was disappointed and vowed to continue to fight the case, as she maintained that she is a natural-born Filipino.

The senator’s lawyer, George Garcia, said that they will file an appeal before the Comelec en banc in five days and insisted that she became a resident in May 2005.

“I have yet to read the decision but I ask all concerned parties to respect the legal process and the rule of law,” said Akbayan party-list Rep. Barry Gutierrez, the spokesman of the Koalisyon ng Daang Matuwid, which is pushing for the presidential candidacy of Roxas.

“The issue is not about Sen. Grace or foundlings. We should all be bound to follow the law,” said Parañaque City Rep. Gustavo Tambunting of the opposition United Nationalist Alliance, which is fielding Binay as its presidential bet.

“The integrity of the Constitution should be protected at all costs,” Tambunting added. (MNS)

Keep Gnats From Becoming A Pain in the Neck