Palace: Roxas’ cursing in 2008 different from Duterte’s expletive vs. Pope 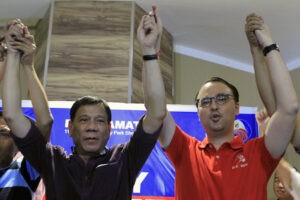 In an interview with reporters, presidential spokesperson Edwin Lacierda said he was “surprised” to hear Duterte’s remarks towards Pope Francis, adding that there’s a clear difference between saying “p _ _ _ _ _ ina” and “p _ _ _ _ _  ina mo.”

Asked of the difference between Duterte’s cursing and Roxas’, Lacierda said: “Look at the video. He spoke against Charter change. He was not referring to any person.”

“Like I said, there’s a difference between ‘PI’ and ‘PI mo.’ Everybody knows that ‘di ba? So you go through the video and you will see he spoke out against Charter change during that time,” Lacierda said.

In a 2008 protest against Cha-cha and the administration of then President Gloria Macapagal-Arroyo, Roxas used an expletive as he addressed the crowd.

Meanwhile, Lacierda said Duterte’s remarks against the Pope were uncalled for.

“Why are you cursing someone who is so well loved by the Catholics? Remember this is a very rare opportunity for the Pope to visit our country and people really lined up in the streets,” he said.

“You take away the fact that I am a government official, I would have also be indignant at the way he unnecessarily cursed Pope Francis. Wala sa lugar. And it’s that, wala sa lugar ‘yung kanyang pagmura kay Pope Francis kahit na sabihin niya na dahil sa traffic,” Lacierda added.

Duterte came under fire over the weekend for cursing Pope Francis over the heavy traffic he experienced in January when the Pope was in the Philippines for a four-day visit.

Amid the issues being thrown against Duterte, Lacierda urged the public to be more critical of the candidates aspiring for higher office in 2016 and their platforms of governance.

“It’s all up to the people to decide and that is the reason why everyone, every candidate should be presenting their platform of government and for us to show where are you going take our country in the next six years?” said Lacierda. (MNS)