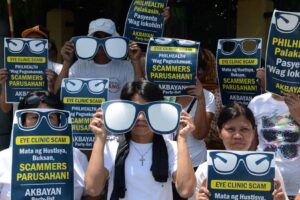 Members of Akbayan Partylist hold a protest, urging senators to thoroughly investigate the alleged syndicated eye scam, at the Senate of the Philippines in Pasay City on Thursday. Complaints have been raised against unscrupulous eye clinics that have performed scores of unnecessary medical operation on patients in order to bloat their payment claims from Philhealth. (MNS Photo)

MANILA (Mabuhay) — The Palace said it continues to work on improving the country’s healthcare system particularly by expanding the coverage of the universal health care program, a Palace official said.

According to the 2015 Quality of Death study index, the Philippines lacks government-led strategy for the development and promotion of national palliative care services.

But in a radio interview on Saturday, Deputy presidential Abigail Valte said that although the government has programs for palliative care, its major thrust is having universal healthcare, noting they want a wider coverage of PhilHealth.

The government reformed the PhilHealth system, she said, noting they removed the discretion on certain illnesses and standardized the range of diseases covered.

Aside from from removing the discretion, she said PhilHealth also increased the number of health issues under its coverage, Valte said.