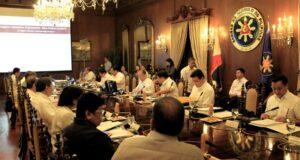 President Benigno S. Aquino III presides over the National Economic and Development Authority (NEDA) Board Meeting at the Aguinaldo State Dining Room of the Malacañan Palace on Friday (September 4). The meeting is to review the Public-Private Partnership projects of the present administration. (MNS photo)

MANILA (Mabuhay) – Amid public clamor to simplify the country’s tax system to ease the burden of taxpayers, Malacañang on Saturday said the government will not lower income tax rates, but added that it will not also increase the mandatory 12 percent value-added tax (VAT) on goods and services.

“According to Commissioner Henares, government is not proposing higher VAT rates. We are for status quo,” Coloma said.

“No change in tax rates, and no new or higher taxes, and also no income tax cuts. Government will just focus on improving collection,” he added.

Meanwhile, Rep. Miro Quimbo, chairman of the House committee on ways and means, previously said his committee is set to approve a bill seeking to lower income tax rates in the country next week.

CBCP exec lauds gov’t for repatriation of over 800K OFWs