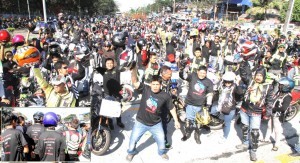 Bikers organizations gathered at North Avenue Elliptical Road in Quezon City’ Sunday (January 26) to make noise barrages to express aloud their right’ in four major cities in Metro Manila in opposing the “Plate No. Vest and No Back Ride” being eyed by authorities, pointing out that ‘police visibility’ is the solution to the crime activities in Metro involving bikers with back ride.’ They insist they are not ‘criminals as they have license to drive’ since the plate number is for registered vehicles.(MNS photo)

MANILA (Mabuhay) – Malacañang on Sunday said it supports tougher measures against crimes by perpetrators who ride “in-tandem” on motorcycles.

Some officials had reportedly proposed the banning of people from riding motorcycles tandem-style.

Coloma said they are hopeful laws that could help prevent such crimes will be passed soonest.