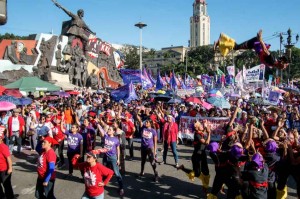 Women, students and activists perform the One Billion Rising dance in celebration of the International Women’s Month at the Bonifacio Shrine in Manila. One Billion Rising is a global movement first held in 2012 to address issues on rape and sexual violence against women. (MNS Photo)

MANILA (Mabuhay) – Malacañang on Saturday asked Congress and the judiciary to come together with the executive branch of government and explore ways to address human rights issues being raised in the US State Department’s 2014 report on the Philippines.

Deputy presidential spokesperson Abigail Valte said many of the problems may involve legislation and prosecution, which are outside the executive branch’s jurisdiction.

“We are asking all agencies concerned … even our colleagues in the judiciary and Congress, to take a look at the report and … concerns raised by the report,” she said on state-run dzRB radio.

She said many observations and suggestions in the report could be addressed by passing the necessary legislation or amending legislation, or addressing judicial processes.

Valte said the Palace is open to colleagues in other branches of government to “… come together and work on” such concerns.

“Tayo naman, we are committed to making the situation better,” she said.

The US State Department’s Philippine country report on human rights practices for 2014 had outlined some significant problems with human rights in the Philippines, including:

– a meager record of prosecutions and lengthy procedural delays

– allegations of prisoner/detainee torture and abuse by security forces

– harassment, including allegations of violence against human rights activists by local security forces

– killings and harassment of journalists

– abuse and sexual exploitation of children

“The government continued to investigate and prosecute only a limited number of reported human rights abuses, and concerns about impunity persisted,” it added.(MNS)