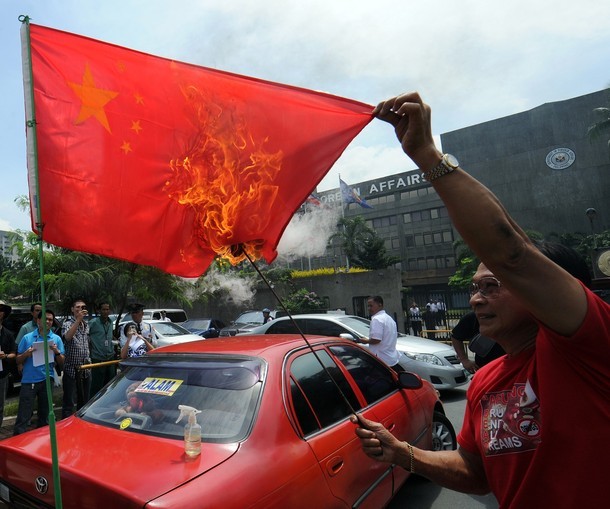 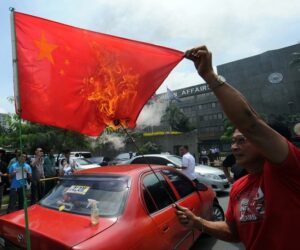 Anti-China activist and former Philippine policeman Abner Afuang Â® burns a Chinese flag during a protest in front of the Department of Foreign Affairs building in Manila on July 27, 2012, amidst the heightening tension between the Philippines and China over the disputed Spratly islands. Tensions over competing claims in the South China Sea could escalate into conflict, with an arms build-up among rival nations raising the temperature, an international think tank warned on July 24. (MNS photo)

MANILA (Mabuhay) – Malacañang on Thursday assured Chinese tourists that it was safe to visit the Philippines, a day after a state-run newspaper in China accused Filipinos of “targeting” Chinese citizens.

“We would continue to convey our assurances that we maximize our efforts in protecting our friends who are visiting,” deputy presidential spokesperson Undersecretary Abigail Valte said at a press briefing.

She also downplayed the supposed “serial attacks on Chinese citizens,” saying “unfortunate incidents” happen to tourists all over the world.

The publication also demanded a public apology from President Benigno Aquino III for the crimes that supposedly targeted Chinese citizens.

China and the Philippines are currently engaged in a territorial dispute over resource-rich parts of the South China Sea, which Manila calls the “West Philippine Sea.”

“The unfortunate incidents are being given the attention when it comes to investigation and the appropriate police and law enforcement efforts,” the Palace official said.

She added that the government, through the Department of Tourism, would take steps to further encourage Chinese tourists to visit the Philippines.

“Considering that our friends from China are the fourth largest visitors to our country, we are hoping to make some steps to avert any impact on [our tourism industry],” Valte said.

China has earlier advised its citizens to forego travel to the Philippines, citing security threats against its embassy and Chinese nationals.

The travel advisory was issued after a foiled bombing attempt on the Ninoy Aquino International Airport (NAIA), which was allegedly launched by a group calling for the government’s tougher stance in its territorial dispute against China.

Malacañang earlier said that this bombing attempt was not a serious cause for concern. (MNS)

Remulla to let justice run its course on entrapped kin