Palo archbishop thanks Pope Francis: May you lead us to peaceful waters 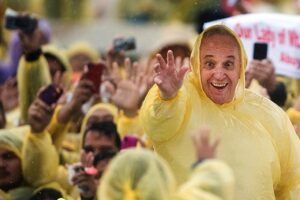 Wearing a raincoat, Pope Francis waves to the crowd after celebrating Mass in Tacloban Airport on Saturday, January 17. Pope Francis will spend a few hours with survivors of super typhoon Yolanda that claimed thousands of lives on November 8, 2013. The meeting will highlight his concern over climate change. (MNS photo)

“You came here despite this weather,” Du said before the end of the Mass led by Pope Francis near the Tacloban airport. “That inspires me to thank God, even amidst trials, we are filled we joy and consolation that you were able to join us.”

“We know that you have been with us from the start,” he added.

Du also asked Pope Francis for the victims to be led to “peaceful waters.”

“Your humble presence among the poor and here gathered here, who have suffered, may you lead us to peaceful waters to God’s love,” he said. “The Lord will not abandon his people. Jesus will never let us.”

The Mass was open to the public, and among the language used in various parts were English, Filipino, Latin, Binisaya, Cebuano, and Hiligaynon.

The Pope arrived here amid inclement weather, as Leyte, along with along with six other areas in the Visayas, was placed under public Storm Signal Number 2 early Saturday morning.

The Pope’s main purpose for visiting the Philippines is to be with the survivors of the typhoon that killed thousands in November 2013.

The Pope earlier arrived in Manila on Thursday afternoon, after a visit in Sri Lanka. (MNS)

Tips for Independent Living After 70