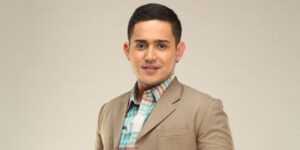 MANILA (Mabuhay) — With a TV project and a movie in the works, Paolo Contis is geared to showcase his acting range through two villainous characters.

First is on GMA-7′s primetime soap opera titled “The Rich Man’s Daughter,” which premiered last May 11. In the said series, he is Anton Maceda, ex-husband of Althea Guevarra, played by Glaiza de Castro who is a battered wife.

The two separated but when he discovered that Althea is in a secret relationship with Jade Tachingco, played by Rhian Ramos, he comes back and blackmails the two. He wanted Jade to pretend that he is her boyfriend.

According to Paolo, they have already finished taping his “wife beating” scenes for flashback purposes and it will be shown on the first week of “The Rich Man’s Daughter.” His character will then return on the fourth week when he starts blackmailing Jade and Althea.

So how does he feel being in a lesbian-themed series?

Being close to the gay community, Paolo admitted that he has always been open to gay or lesbian issues.

As to how “evil” or villainous he will be as Anton, Paolo said that being “soap opera bad” is limiting unlike in the indie-film he’ll soon do.

Titled “Tupang Ligaw” under BG Productions, Paolo is the “kontrabida” of Mateo Guidicelli who plays the lead role.

“Medyo biblical ang character kaya gusto ko sana biblically bad also para maiba. Especially as this is the opportunity to do something extreme. If you want it bad itodo mo na. I also want them to know that I’m open to do whatever is assigned me,” explained Paolo.

“Tupang Ligaw” is an action advocacy film by Rod Santiago. It advocates pro-gun ownership but shows the perils of irresponsible gun ownership as well.

Paolo is excited to work with new filmmaker Rod Santiago who aims to inject “new flavor” in an action flick like the martial arts called Pen-jak.

How Vice Ganda spends his money

Andi to fight for love ‘against all odds’