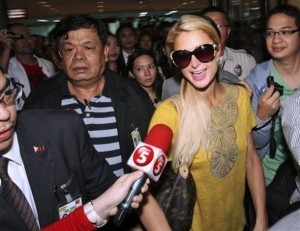 American heiress and media personality Paris Hilton is escorted to her limousine shortly upon arrival at the Ninoy Aquino International Airport in Manila, Philippines late Sunday Aug.14, 2011. Hilton is in Manila to meet with her friend, Filipino boxing champion Manny Pacquiao and his wife Jinkee as well as inaugurate her Paris Hilton boutique and promote a beach resort.

Besides becoming the firmâ€™s official ambassador for the project, Hilton will also design the concept for the Azure Beach Clubhouse.

Azure Residences is a six-hectare residential development with a resort-inspired theme. It boasts of a sizeable man-made beach.

â€œHer unparalleled style that made her a successful businesswoman and a style icon, as well as her zest for living the good life are the qualities that we would like to incorporate into our vacation-inspired residential property,â€ Century Properties Chief Operating Officer Mr. John Victor R. Antonio said in a statement.

The socialite, who appears in a reality show entitled â€œThe World According to Paris,â€ arrived Sunday night in Manila to mix business and pleasure.

Robbie Antonio, managing director of Century Properties, added: â€œWe chose Ms. Paris Hilton because of her exposure to travel and her predisposition to many aspects of design – from fashion, beauty, lifestyle to world-class service. Deciding to work with her was the logical choice as we found no other personality more suited to embody the upscale fashionable beachgoer.â€

Hilton, for her part, said: â€œI look forward to working with Century Properties and feel confident they will develop an amazing and aspirational destination in Azure Urban Resort Residences. I will personally help design The Azure Beach Club, creating a unique and special place that will bring happiness to many people. Iâ€™m excited for people to experience it.â€

Minutes after her arrival at the Ninoy Aquino International Airport, international celebrity Paris Hilton Â complained to Mr. Antonio John of Century Properties that she lost her two iphones

Hilton immediately informed the airport authority and the airline staff of Emirates Airline as soon as she got off the plane.

Hilton arrived in the Philippines on board Emirates Airline flight EK 334 for her five day photo Â and video shoot with a real estate company.

At the airport, Hilton Â was mobbed by airport personnel Â but was whisked away and led inside the airport VIP room where she said she lost her phones. However, Hilton wasnâ€™t sure if the incident happened in Dubai or inside the aircraft.

Airport security personnel said they noticed that Hilton Â stopped in a corner as she disembarked from the planeÂ while walking down the east arrival concourse Â to look for her two iphones Â placed inside her hand carried bag, but she never found it

Airline staff from emirates airline was called inside the VIP room where Hiltonâ€™s documents were processed by immigration personnel and to find out the details of Hiltonâ€™s complaint. (MNS)