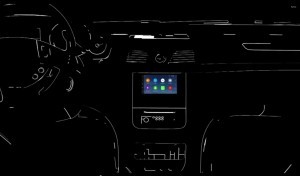 (Relaxnews) – The RNB 6 is an aftermarket in-car infotainment system that runs the latest version of Android but that also supports CarPlay, Apple’s system for connecting an iPhone and its apps in the car dashboard.

The unit packs a 7-inch 720p HD touchscreen display and offers a host of features even when not connected to a smartphone including an integrated navigation system and voice control for making calls and changing music tracks. It can also connect to a car’s diagnostics port to provide diagnostics information and can link to a car’s dashboard cam, too.

When both Apple and Google announced that they were developing systems for safely connecting smartphones to the car dashboard there were fears that the car market could become as segregated as the old PC and current smartphone market – i.e., that some car brands would only support Apple and others only Android.

However, the Parrot system, which runs a tweaked version of Android Lollipop, the latest version of Google’s smartphone and tablet operating system, has native support for Android Auto and for CarPlay. So if a compatible iPhone is connected to the RNB 6, users will be able to ask Siri questions, use Apple Maps or navigation and access their music libraries on the go.

Other thoughtful features include being able to program music playback so that it optimizes speakers based on how many people are in the car and where they are sitting.

Although Parrot is demoing the RNB 6 at this week’s International CES, which gets underway officially on Tuesday in Las Vegas, the company is yet to confirm when the unit will be officially going on sale or how much it is expected to cost.

Egypt’s army stands aside as protesters vow to top 1M

Comelec not keen on regulating campaign on social media