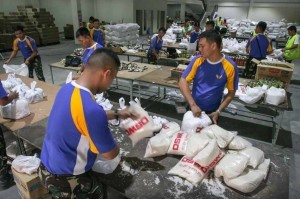 Soldiers pack relief goods at the warehouse of the Department of Social Welfare and Development in Pasay City on Friday in preparation for the aftermath of typhoon Ruby. Government response was highly criticized following the devastation of super typhoon Yolanda in 2013. (MNS photo)

MANILA (PNA) – Bayan Muna Party-list Rep. Neri Colmenares called on Congress on Monday to fast-track the passage of his House Bill No. 3648 or the Evacuation Center Act, saying that “with strong typhoons like ‘Yolanda’ and ‘Ruby’ becoming the norm due to climate change, we should also adapt and ensure the safety of our constituents.”

He said it would be best to have at least one climate resilient evacuation center in every municipality if possible to shelter the population and to avoid what happened during “Yolanda” where evacuees died in the schools in Tacloban City last year.

“We hope that this bill will at least minimize casualties from disasters, mishaps and calamities. Hopefully, it will help save lives,” he added.

He said that this is the same bill which was filed as early as in the 15th Congress and was refiled in the 16th Congress last year. (MNS)