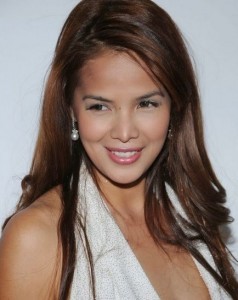 Former sexy star Patricia Javier, who has returned to the Philippines, shared the reason why she is making a showbiz comeback.

She added that she also wants her children to learn more about Filipino values as well as their native language.

“Siguro na-miss ko siya (showbiz) but at the same time, si Boss Vic del Rosario, siya ang nag-push sa akin na, ‘hey, come back. I have a better project for you.’ This time daw, bibigyan niya ako ng medyo dramatic role. So I signed up for Viva,” said Javier, a mother of two who used to work as a head aesthetician at a dermatological clinic in San Diego, California.

Javier was known for her movies “Ang Kabit ni Mrs. Montero” and “The Unfaithful Wife.”

She was also part of a girl group called Asian Dolls.

Currently, Javier is promoting her album titled “Genesis: Songs From My Heart” under Viva.

She is also doing an indie film with Ricky Davao, Victor Neri and Melissa Mendez. (MNS)