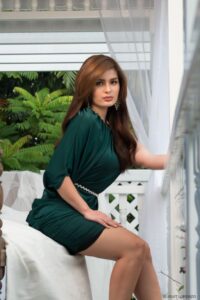 Actress Pauleen Luna has begun preparing for her wedding to comedian Vic Sotto.

On Instagram, Luna gave her fans and followers a glimpse of her meeting with her wedding coordinator.

In the caption, she wrote: “Met with our wedding coordinator for the first time. Thank you @rnepevents! Looking forward to our next meeting.”

In a previous interview, Sotto denied that his wedding to Luna will happen during the Christmas season, as initially revealed by the actress’ manager, Lolit Solis.

Sotto confirmed his engagement to Luna early this month.

The comedian hinted that the wedding might happen early next year. “For me, personally, before the Year of the Goat ends,” he said.

According to the Chinese calendar, the Year of the Goat will last until February 7, 2016.

Sotto said he prefers to have an intimate wedding.

He also played down the growing excitement surrounding the much-awaited showbiz event.

The couple marked their fourth year together last December.

Sotto has four children with past partners—Danica and Oyo Boy with Dina Bonnevie, Vicco with Coney Reyes, and Paulina with Angela Luz. (MNS)

Anne on the run