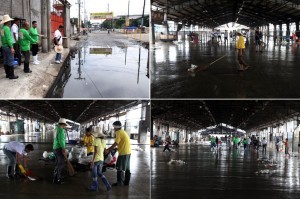 MANILA  (Mabuhay) — The Philippine Fisheries Development Authority (PFDA) Friday bared the construction of more than P183-million worth of fish port projects in seven municipalities of the Autonomous Region of Muslim Mindanao (ARMM) that is part of a comprehensive peace and development intervention for the economic recovery and development of the region.

The municipal fish port (MFP) projects – totaling P183,239,520 – would be constructed in the municipalities of Sumisip, Basilan; Buluan and Mangudadatu in Maguindanao; Parang, Sulu; and Panglima Sugala in Tawi-Tawi: together with the cities of Lamitan, Basilan and Marawi, Lanao del Sur.

PFDA General Manager Edurado Chu said feasibility studies have already been completed and that his agency is set to finish the detailed engineering designs by the end of August this year, with public bidding commencing immediately afterwards.

Construction of the MFPs will begin in January 2014 and, barring any unforeseen glitches, would be finished by the third quarter of next year.

“Once finished, each MFP’s would provide 500 direct jobs and would be capable of handling 25 metric tons of fish each day,” Chu said.

Part of the project implementation is the training of personnel on port operation and maintenance for the eventual turnover of the management, supervision and administration of the MFPs to the local government units concerned.

Chu said the MFPs would increase the productivity and income of the local fisherfolk in their respective areas.

“Sustaining the growth momentum in these areas would translate into more investments and jobs that would greatly reduce poverty,” Chu said.

He said the MFPs are being constructed to tap the vast economic potential of ARMM in terms of fisheries.

Of the seven, the seas off Lamitan City, Sumisip, Parang and Panglima Sugala are teeming with high value marine fishes like tuna and tanigue among others.

On the other hand, Marawi City and the municipalities of Buluan and Mangudadatu are situated along the borders of the second largest lake in the country, Lake Lanao.

The PFDA head likewise said that of the seven port landings to be built, two would be constructed with ice plants and cold storage facilities – Sumisip and Marawi City.

“These facilities would provide the ice requirements of the fishing industry in the said LGUs,” he said.

In the meantime, besides the ARMM, Chu said the PFDA is also set to construct 50 MFPs and post-harvest facilities in different parts of the country “for the poorest of the poor.”

These MFPs are intended to provide badly needed infrastructure to sustenance fishermen for them to improve efficiency the handling and distribution of their catch to nearby markets.

Five of them are already underway and are set to be finished by the end of the year – in Real, Quezon; Calabanga, Camarines Sur; Rozas, Capiz; Catbalogan, Western Samar; and in Gov. Generoso in Davao Oriental.

At present, the PFDA had already built and turned over 76 MFPs to various LGUs across the country. (MNS)
MANILA, July 26 (Mabuhay) — Senator Pia Cayeano, a health advocate, on Friday urged the government to make the metropolis friendlier to people who would prefer to ride a bike or take a walk to get to their destination.

Cayetano made this appeal as she pushed for the alternative approaches, including biking or walking, to address traffic congestion in Metro Manila based on her Senate Bill No. 26.

”Yes to walking, biking but let’s make it safe and accessible,” Cayetano said.

The lady lawmaker lauded the efforts of the government to solve traffic problem, saying one of the alternatives is to encourage the people to walk or bike to reach their destination.

“I support government efforts to ease traffic congestion in Metro Manila. I think it is laudable that we are now talking more about walking and biking as serious alternative modes of transportation. But to truly encourage people to do so, we must provide the infrastructures that will make walking and biking safe, accessible and convenient,” said Cayetano.

In her SB No. 26 or the “Sustainable Transportation Act of 2013,” Cayetano seeks to address the traffic situation, pollution and quality of time lost due to traffic by promoting alternative and sustainable modes of public transportation.

She said the infrastructures would include more bicycle lanes and covered walkways and footbridges, given weather conditions such as heavy rains, to make biking and walking safe and appealing to the public, as well as the revival of the river ferry system through possible public-private partnerships.

Other proposals under SBN 26 include the establishment of a Bus Rapid Transport System (BRTS) and alternative vehicle reduction schemes that encourage car-pooling and telecommuting (working from home).

“As things stand, our MRT and LRT coaches are not enough to accommodate the millions of passengers who take these trains every day, while EDSA won’t get any wider to accommodate an ever increasing volume of vehicles. To compound all these, gasoline prices will keep going up and add more pressure to raise transport fares in jeeps, buses and taxis and further burden the public” she said.

”It is high time to pursue alternatives and come up with a national sustainable transportation plan,” Cayetano said. (MNS)