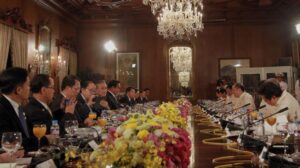 President Benigno S. Aquino III exchange views with General Prayut Chan-o-cha, Prime Minister of the Kingdom of Thailand, during the expanded bilateral meeting at the Aguinaldo State Hall of the Malacañan Palace on Friday (August 28). This is the Thai Prime Minister’s first official visit to the Philippines since assuming office in August 2014. (MNS photo)

MANILA (Mabuhay) — Philippine economic growth met expectations, picking up from their lowest levels in three years, thanks to services and industry, consumer spending and investment.

For the first half, growth was 5.3 percent. National Economic and Development Authority (NEDA) Secretary Arsenio Balisacan said the full year growth target is “very much challenged.”

“It is very likely we will scale down the target,” Balisacan said at a press conference.

Government spending was a drag, with a 3.9 percent increase, though that was better than the 1.7 percent in the first quarter.

However, public construction expanded 20.7 percent, from a 24 percent drop in the first.

He said Philippine growth is the third fastest in the region, showing “resilience” against global events such as China’s economic slowdown and its effect on financial markets. China devalued its yuan two weeks ago to boost exports, putting competing exporters like the Philippines at a disadvantage.

Some analysts said the Philippines may have to allow the peso to depreciate to stay competitive.

“We acknowledge fears about the peso’s depreciation. But if not sharp, it is still positive,” Balisacan said. (MNS)