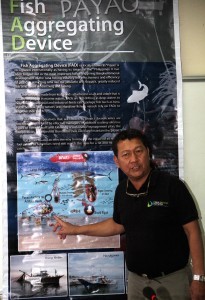 Director Asis G. Perez of Bureau of Fisheries and Aquatic Resources (BFAR) bares that in the waters of Quezon province alone, a total of 49 units of payao are currently being deployed; another 66 units of offshore payao will deployed in Benham Rise; at least seven commercial fishing vessel (ring netters) have signified interest to start fishing operations in the areas, during the presscon at PCA Bldg. Elliptical Road, Quezon City on Wednesday (May 29, 2013).(MNS photo)

MANILA (Mabuhay) — As China asserts its presence in the West Philippine Sea, Filipino fishermen are actively avoiding Scarborough Shoal in the waters just off Zambales province.

Amid the tension in the western sea board, the Philippines has announced the opening of a new fishing ground in the east — the Benham Rise.

Benham Rise, a 13-million hectare undersea region that has untapped potentially rich mineral and gas deposits, is located off the coast of Aurora province, opposite the disputed waters of South China Sea.

Bureau of Fisheries and Aquatic Resources (BFAR) Director Asis Perez said more than 60 fish-aggregating devices will be installed at Benham Rise starting May 30.

According to BFAR, the area is rich in marine resources.

The government is confident the new fishing ground will not be a subject of a territorial dispute in the future.

But fisherfolk group Pamalakaya said while opening of Benham Rise is a welcome development for fishermen, they have information that a fishing ban will be implemented in 10 fishing grounds.

BFAR said Pamalakaya’s information is untrue, as there is no fishing ban at all in the whole country.

Under the United Nations Convention on the Law of the Sea (UNCLOS), Benham Rise, also known as Benham Plateau, is part of Philippine territory.

It is the Philippines’ first successful validation of a claim in accord with the 1982 Law of the Sea Convention.

“There are no Chinese poachers in Benham Rise. Also there are no reports of Taiwanese fishing activities there,” he said.

“We are the only country that was allowed to fish blue fin tuna. There’s a regional Pacific management body in charge of fishing in the Pacific waters,” he added. (MNS)