PH-US forge another labor protection accord 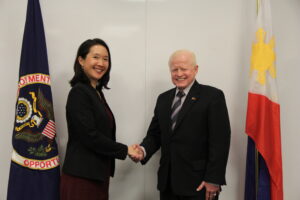 PHL-US Accord. Ambassador Jose L. Cuisia, Jr. and Chair Jenny R. Yang of the Equal Employment Opportunity Commission shake hands following the signing of a Memorandum of Understanding that seeks to protect the rights and welfare of Filipinos working in the United States. (Philippine Embassy Photo by Majalya A. Fernando)

WASHINGTON, D.C.—The Philippines marked another milestone in its efforts to look after the interests of overseas Filipinos by formally entering into another partnership agreement that will protect the rights and welfare of Filipinos working in the United States.

In a statement, the Philippine Embassy said a Memorandum of Understanding (MOU) was signed on Thursday between the Department of Foreign Affairs (DFA), represented by Ambassador Jose L. Cuisia, Jr., and the US Equal Employment Opportunity Commission (EOCC), represented by its Chair Jenny R. Yang.

“We are pleased at being able to formalize our alliance with the EOCC and collaborate closely towards ensuring that Filipino nationals working in the US are accorded equal opportunities at their workplace,” Ambassador Cuisia said as he thanked the Commission for initiating collaborations with countries like the Philippines that have substantial worker populations in the US.

Ambassador Cuisia said the MOU with the EOCC is an affirmation of the US government’s advocacy for equal opportunity in the workplace and prohibited employment discrimination.

Ambassador Cuisia, at the same time, cited the contribution of EEOC’s District Representatives who have participated in the Embassy’s consular outreach missions in the US Southeast. He said EEOC’s participation enhanced the awareness of Filipino workers of their rights as well as remedies available to them under existing labor laws regardless of their status.

In her remarks, EEOC Chair Yang noted the invaluable contribution of Filipinos to American society and the US workforce and reiterated the EEOC’s commitment to uphold the rights of migrant workers.

Chair Yang said EEOC estimates place the number of Filipino immigrant workers in the US at more than one million. She said Filipinos not only comprise one of the largest immigrant groups but also have a high rate of participation in the labor force compared to other groups.

“By signing this MOU today, the Commission signals its unwavering commitment to justice and equality in the workplace for individuals of Filipino descent whose efforts and contributions have been invaluable to American society and the US workforce,” said Chair Yang.

Officials from the US Department of Labor – Occupational Safety and Health Administration were present at the signing ceremony, which was streamed live to the various EEOC district offices throughout the US.