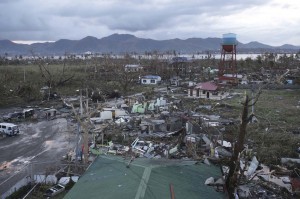 Houses are damaged after powerful Typhoon Haiyan slammed into Tacloban, central Philippines on Saturday, Nov. 9, 2013. Rescuers in the central Philippines counted at least 100 people dead and many more injured Saturday, a day after one of the most powerful typhoons on record ripped through the region, wiping away buildings and leveling seaside homes with massive storm surges.(MNS photo)

The higher number of operating days in the first three months of the year drove costs and expenses to P2.274 billion from P682.8 million, said the miner led by tycoon Manuel V. Pangilinan.

“We are glad to be starting the year on a positive note, and looking forward to operate finally the Padcal mine for the full 12 months in 2014, after two successive years of partial operations,” president and chief executive Eulalio B. Austin Jr. said in a statement.

The Padcal mine in Itogon, Benguet was ordered closed by the Mines and Geo-Sciences Bureau in August 2012 after its tailings pond collapsed at the height of enhanced monsoon rains that became one of the worst mining disasters in Philippine history.

“Furthermore, we believe the company has completed all the remedial measures and investments required to improve the water management system at Padcal and, last year, these new facilities were commissioned,” Austin said.

“The construction of the third and final chute is also currently underway and will be completed by July 1, 2014,” he added.

DUTERTE: EVEN IF I SAIL TO WEST PHILIPPINE SEA, NOTHING WILL HAPPEN