Los Angeles, 28 October 2013. – An alliance agreement signed today by the Philippine Consulate General in Los Angeles and the US Department of Labor’s Wage and Hour Division (US DOL WHD), Western and Southwest Regional Offices, aims to educate Filipino workers, both legal and illegal, on their rights to fair wages and working conditions.

The alliance agreement establishes a collaborative relationship to provide low wage at-risk workers in Southern California, Southern Nevada, New Mexico, Arizona and Texas with information, guidance, and access to education and training resources to help workers understand the rights and responsibilities of both employers and employees under the US Fair Labor Standards Act.

“This agreement aims to reach out to Filipino workers and inform them that the right to a decent living and a safe workplace bear no linkage to a worker’s immigration status,” Consul General Maria Hellen Barber Dela Vega said. “The social contract guaranteed by the US Fair Labor Standards Act includes a social protection floor with strong safeguards for all workers, most especially the poorest and the most vulnerable.” 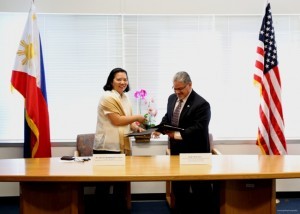 Regional Administrator Ruben Rosales of the US DOL WHD Western Region said the agreement was long overdue considering the large number of Filipino workers in the region.  “Every Filipino worker stands to benefit from the agreement, in particular, the workers from the healthcare, agricultural and domestic industries,” he added.

He explained that low wage workers often face deplorable working conditions and are subject to labor exploitation. The lack of information on available remedies by which these workers can protect their rights further increases their vulnerability. As a result, they are often paid less than workers in comparable occupations and work longer hours.

He encouraged Filipino workers who believed that they are not paid properly to file a complaint directly with the US DOL WHD or seek the assistance of the consulate.

Consul General Barber Dela Vega closed the signing ceremonies by saying that she will encourage her counterparts from the other ASEAN consulates in Los Angeles to consider entering into a similar agreement with the US DOL WHD. She noted that this is the first agreement by the US DOL WHD with an Asian country in Los Angeles.

BuCor prepares for establishment of jails for heinous criminals