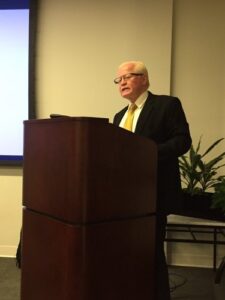 WASHINGTON, D.C. — The exciting reform story of the Philippine economy headlined the Doing Business with the Philippines Forum held at the World Trade Center Kansas City on 28 September 2015.

In his keynote address, Ambassador Cuisia emphasized that the country’s economic performance can be credited to the good governance model of President Benigno S. Aquino under his “Daang Matuwid” (“Straight Path”) program, as well as the sound macroeconomic fundamentals that have been achieved under the leadership of the economic managers. 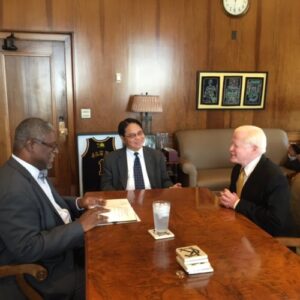 “The positive developments in the Philippine economy during the past five years can be best summarized as an exciting reform story,” Ambassador Cuisia told the Forum.

Even while noting a slowdown in the Philippines’ economic growth during the first two quarters of 2015 compared to the first two quarters of the previous year, and that some volatility was experienced by the Philippine Stock Exchange, Ambassador Cuisia reassured the Forum that stock investors were reacting to external factors rather than to problems with Philippine macroeconomic fundamentals.

He also added that “recent declines and volatility in the Philippines’ stock market should be seen as an opportunity for investors as the Philippine economy is positioned better than other Southeast Asian economies to withstand negative financial trends occurring regionally and globally.”

Before the Ambassador’s keynote address, there were presentations made by Trade Representative Iñigo, and Director Nyamusi Igambi of the US Commercial Service office in Kansas City. 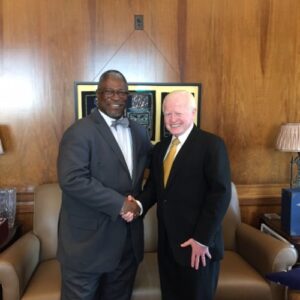 Ambassador Jose L. Cuisia, Jr. met with Mayor Sylvester “Sly” James, Jr. at the Kansas City Hall (Missouri) on 28 September 2015 to discuss trade and investment opportunities in the Philippines for businesses in the Greater Kansas City Area.(Photo courtesy of http://www.philippineembassy-usa.org/)

Mr. Iñigo spoke about the various trade and investment opportunities in the Philippines, focusing on key sectors such as manufacturing, services, and infrastructure. He began his presentation with a detailed summary of the trade and economic performance of the Philippines in the last five years. He highlighted the gateway role that the Philippines may offer to American businesses that intend to penetrate not only the Philippine market but also the ASEAN and European markets, through the opportunities arising from ASEAN economic integration and Philippines’ EU GSP-plus status, respectively. He also showed video presentations relating to furniture design and Manila FAME, as well as on the Philippine economy and tourism.

In her presentation, Ms. Igambi provided a detailed description of the matching, networking, and substantive assistance that the US Commercial Service can provide for those interested in exporting to the Philippines or doing business with the Philippines. She also identified leading sectors that offer opportunities for US companies wanting to export to the Philippines. These sectors include aerospace, electrical power systems, information technology, telecommunications, medical equipment, defense and infrastructure.

The delegation then fielded questions from the participants in an open forum following the presentations and the keynote address.

Ambassador Cuisia likewise attended several Filipino community events organized by the Filipino Association of Greater Kansas City on 26-27 September 2015. He commended the Filipino-Americans in the area for possessing “the inclination and foresight to gather information, to record and to publish the beginnings and growth of the community.”

“Your collective experience forms a vital part of the historical account of the Filipino diaspora in the United States. Filipino-American communities have a responsibility to perpetuate the stories of the diaspora so that future generations will always know where they came from and how their lives intertwine with those of Filipinos in the Philippines and with the other communities in the US,” the envoy said.