MANILA, January 13, 2011 (AFP) – Lawyer Meg Gutierrez gets up before dawn in an effort to beat the worst of Manila’s traffic but still ends up spending almost two hours driving the short distance to work.

In the evening Gutierrez often has to navigate her car through the Philippine capital’s peak commute period, meaning the return home is longer and she can waste up to five hours a day in bumper-to-bumper frustration. 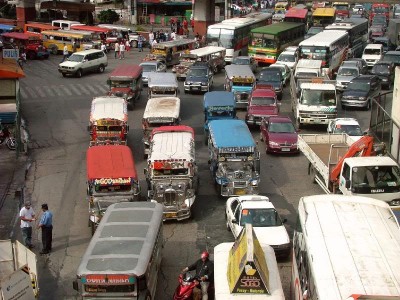 “I spend so much time on the road. When I get home, I just sleep, and then wake up again the next day. I really have to budget the time for my responsibilities, my errands, my work,” Gutierrez, 28, told AFP.

But Gutierrez said she would still prefer making the 20-kilometre (12-mile) trip by car than public transport, as the irregular bus schedules, crowded buses and lack of trains make that an even more arduous option.

And in a phenomenon being repeated in many Asian cities, traffic congestion is steadily getting worse in Manila as increasing numbers of people can afford to buy a car.

Nearly 170,000 cars were sold in the Philippines last year, a 27.2 percent increase from 2009, according to industry figures released on the weekend.

There are now nearly two million cars registered in Manila, meaning there is roughly one vehicle for six people in a city where poorly built roads and a general flouting of traffic rules exacerbate the congestion woes.

“Driving is difficult because of the buses and jeepneys (mini-buses). They just swerve into your path. I get startled easily and am agitated most of the time,” said Gutierrez, who drives a four-year-old Toyota sedan.

Even the president of the Automobile Association of the Philippines, Augusto Lagman, conceded that there may be too many cars on the road.

But he insisted that poorly maintained roads, lax enforcement of traffic rules and the notorious habits of bus and taxi drivers were the main factors behind Manila’s transport nightmare.

“There are designated loading and unloading zones for buses but no one is observing them. Even taxi drivers, when somebody hails them, they just stop in the middle of the road. They don’t even go to the curb,” he said.

Environmental campaigners say a more alarming consequence of booming car sales than the traffic is the worsening air pollution from the sooty exhausts of badly-maintained buses and diesel-run jeepneys.

“As for the health impact, based on data from the health department, there are increasing cases of bronchitis, asthma and respiratory diseases, especially in children.”

About 80 percent of all air pollution in Manila is caused by motor vehicles, according to the environment department.

Automobile association president Lagman said the solution to the traffic problem was to expand the capital’s rail system.

The city’s three overhead railways only cover a combined 46 kilometres (28 miles) and, with demand so high, train passengers have to endure excruciatingly cramped conditions during rush hours.

President Benigno Aquino has proposed five projects to integrate and extend the overhead railway to areas outside the capital under an ambitious 570-million-dollar scheme to be funded by the government and private companies.

But the projects have yet to begin and, even if they do, would take years to implement, government documents show.

Segovia, executive director of the Partnership for Clean Air coalition, said some progress had been made in these areas.

She said many taxis had already been converted to use liquefied petroleum gas, the government had launched a pilot fleet of buses using compressed natural gas and some districts now used a few electric “jeepneys”.

But Segovia said both the technology and infrastructure had a long way to go, pointing out that electric vehicles still had no place to recharge quickly.

The partnership also aims to promote more conventional solutions, such as walking and biking, but even these simple measures face obstacles, according to Segovia.

“You are not sure about your safety on the sidewalks. There are people who will snatch your bags when you are walking. The sidewalks are too hot and too uneven,” she said.

And while her group encourages the use of public transport, Segovia agreed that it made sense for many Filipinos to prefer driving in Metro Manila.

“They feel they are safe in cars, they feel cars are convenient… they don’t want to take public transport because the system is not reliable and it is not safe,” she said.