Philippines and Japan vow to remain steadfast partners of development 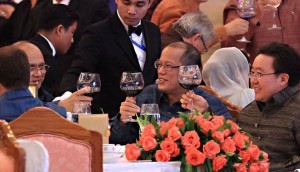 VIENTIANE, Lao PDR – Philippine President Benigno S. Aquino III joins fellow Heads of State and Government for the ceremonial toast during the Gala Dinner hosted by Lao People’s Democratic Republic President Choummaly Sayasone and spouse Keosaychay Sayasone, at the Gala Dinner Hall, Don Chan Palace Hotel on Monday night (November 05, 2012) for the 9th Asia-Europe Meeting (ASEM9). At the summit, President Aquino will exchange views with counterparts from the two regions on the Eurozone crisis, trade and investment facilitation, energy and food security, disaster management, counter-terrorism, migration, and regional issues, among others. The President will highlight the country’s accomplishments in good governance and inclusive growth, while calling for an enhanced Asia-Europe economic partnership in the face of global economic and financial uncertainties. ASEM is a dialogue process started in 1996 with the main objective of forging a comprehensive partnership between Asia and Europe. It is currently composed of 48 partners – all 10 ASEAN countries, 9 other Asian countries, the 27 member states of the European Union, the European Commission and the ASEAN Secretariat. The Philippines is a founding partner of ASEM. (MNS photo)

VIENTIANE, Lao People’s Democratic Republic (Mabuhay) -–- The Philippines and Japan have vowed to remain steadfast partners of development in a move seen to further strengthen relations between the two countries.

Prime Minister Noda pledged to continue working with the Philippines on development projects while President Aquino cited Japan as a “longtime, valuable and strategic partner of the Philippines” through its official development assistance program.

Prior to the bilateral meeting, President Aquino joined the other heads of state and government of the Asian and European countries attending the 9th Asia Europe Meeting (ASEM) during its formal opening ceremonies held at the National Convention Centre here.

In the formal opening ceremonies, President Aquino and the other heads of delegations were welcomed by Lao People’s Democratic Republic Prime Minister Thongsing Thammavong and then by Lao President Choummaly Sayasone. Thereafter, the heads of ASEM delegations posed for a group photo session.

After the group photo session, President Aquino also participated in the
ASEM Enlargement Ceremony where the Lao President personally congratulated the Republic of Bangladesh, the Kingdom of Norway and the Swiss Confederation on their admission as new partners of ASEM.

Earlier, President Aquino held three separate bilateral meetings with the heads of Norway, Switzerland and European Union. It was President Aquino’s first time to attend the ASEM Summit since his assumption into office in June 2010. (MNS)

VIENTIANE, Lao PDR – President Benigno S. Aquino III converses with Japanese Prime Minister Yoshihiko Noda during the bilateral meeting at the Dok Chik Room of the National Convention Centre at the sidelines of the 9th Asia-Europe Meeting (ASEM9) on Monday (November 05). Japan continues to be the Philippines’ top source of official development assistance (ODS). Japan’s assistance, through loans, grants and technical cooperation covers a wide range of areas, including public works, socio-economic infrastructure, transportation and communications, agriculture and capability-building among many others.(MNS photo)

Jinggoy: No time to reverse veto on height requirement bill

Permanent residence for caregivers is no longer automatic