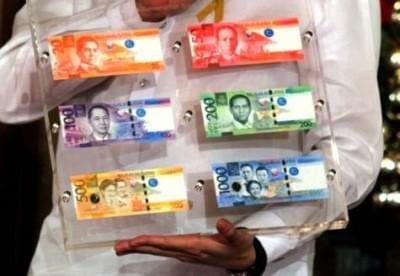 MANILA, December 20, 2010 (AFP) – The Philippines on Monday defended its new peso notes, mocked by critics for featuring error-strewn maps of the country and apparently inventing a new species of parrot.

The central bank started shipping the bills to banks last Friday and they should be publicly available by Christmas, deputy governor Diwa Gunigundo said.

“If we want to make the Philippine map that specific and accurate we would have had to draw all 7,000 islands,” Gunigundo said in an interview on DZBB radio.

“What we wanted to do was abstract the general location of all these important parts of the Philippines,” he said.

Map makers, including one of the experts drafted to delineate the boundaries of the Tubbataha Reefs natural park in 1994, have pointed out that the spectacular coral formation was misplaced by hundreds of kilometres (miles).

Gunigundo also defended the rendering of a rare native bird, the blue-naped parrot, on the 500-peso bill, saying it was patterned after the yellow colour scheme of the denomination.

The Wild Bird Club of the Philippines, a birdwatchers’ organisation, has insisted the yellow-beaked parrot on the note does not exist anywhere in the country, since in real life the blue-naped parrot has a red beak.

“It took us three years to research (the design),” Gunigundo said, brushing off allegations of slipshod preparation.

The head of the government’s National Historical Institute was an adviser to the bank’s numismatic committee, he added.

“Our local artists who designed our six denominations also did research and they consulted many of our experts in the Philippines.”

More important than the design are the new bills’ security features to make their duplication by counterfeiters much more difficult, Gunigundo said.

It is not the first time the central bank has been left red-faced over currency design. It was forced in 2005 to withdraw bills that misspelled the name of Gloria Arroyo, the predecessor of current President Benigno Aquino, whose signature appears on the new legal tender.

The 2005 bill, which called her Gloria Arrovo, became a much sought-after collectors’ item.

Sotto, Chiz not in favor of joint Congress probe on Mamasapano clash