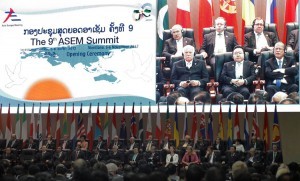 MANILA, Nov 7 (Mabuhay) — President Benigno S. Aquino III said he advanced the interest of the country’s seafarers during his attendance to the 9th Asia Europe Meeting (ASEM) in Laos this week.

The Philippines is concerned on a possible blacklisting of the European Union, which will surely affect Filipino seafarers and their families, the President said.

The President noted that the previous administration neglected adhering to maritime rules mandated by the Standards of Training, Certification and Watchkeeping (STCW) of the European Commission.

For the country to cope with the European rules, the Chief Executive said he signed Executive Order no. 75 instructing the Department of Transportation to make sure that Philippine maritime institutions follow the guidelines set by the STCW.

Because of government initiatives, the Philippines remains in the European Commission’s maritime whitelist, the President said adding that he will see to it that the country will continue to be included in the whitelist in the next EMSA audit.

Around one-fourth of the world’s seafarers come from the Philippines.

According to the President, Norwegian Prime Minister Jens Stoltenberg praised the Philippines for its reforms and pro-poor initiatives.

There are around 17,500 Filipinos manning Norwegian-owned, -managed, or -operated ships, compelling Norway to invest in putting up training centers to hone the skills of Filipino seafarers, the President said.

At the same time, Norway made a commitment to assist the Philippines to make sure that it gets the nod of the European Union maritime audit.

Aside from hiring Filipino seamen, Norway currently needs a huge pool of manpower especially in the medical sector and the Philippines could seize this opportunity, the President said.

Norwegian companies are also active in investing in the country’s stock market, he added.

The President joined 51 other leaders comprising the ASEM member countries in the two-day meeting in Vientiane, Lao People’s Democratic Republic this week.(MNS)