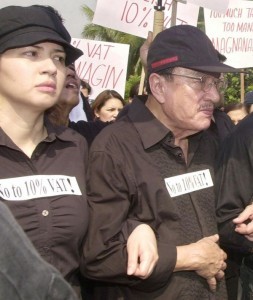 In this file photo taken on January 20, 2003, Philippine king of comedy Rodolfo Quizon, popularly known as Dolphy (R) links hands with his partner, singer Zsa Zsa Padilla while marching on towards the Senate building during a rally in Manila. The Philippines wept July 10, 2012, as the country's most popular comedian Dolphy succumbed to pulmonary disease, after a month of being hospitalised, at 83. Â©AFP PHOTO/Joel NITO

(MANILA-AFP) – The Philippines wept Tuesday as the country’s most popular comedian Dolphy succumbed to pulmonary disease after a month in hospital. He was 83.

Born Rodolfo Vera Quizon, Dolphy was widely regarded as the country’s “King of Comedy” in a career that spanned seven decades playing colourful comedic roles, from a cross-dressing homosexual to a poor jack of all trades.

His passing was announced by ABS-CBN television, the country’s leading broadcaster which aired his hit sitcom in the 1990s about a poor widower struggling to raise his children in the slums.

ABS-CBN said Dolphy’s passing was confirmed by his partner Zsa Zsa Padilla, an actress also employed by the station.

Dolphy made millions laugh even during the Philippines’ darkest moments, including the brutal 20-year rule of the late dictator Ferdinand Marcos, which ended in 1986.

In the 1970s he played the poor husband to a rich wife, who poked fun at his loud-mouthed mother-in-law, giving comedic relief during Marcos’ martial law regime that left thousands dead and missing.

It was a slapstick brand of comedy that steered clear of politics or criticism of Marcos.

The show was so popular that it was revived in the form of at least eight movies over the last two decades, introducing younger generations to Filipino humour.

Movie critics branded Dolphy the Bob Hope of the Philippines, and his philanthropic work helping the poor and unemployed actors was also well known.

Politicians looking to exploit Dolphy’s mass appeal for years unsuccessfully tried to lure him into running for public office.

News of Dolphy’s death sent shockwaves across social networking sites, with many of his fans and colleagues paying tribute to him.

“RIP Dolphy. Kevin Cosme really gave so much laughter to my childhood,” tweeted Andreo Calonzo, referring to one of Dolphy’s most memorable television characters.

“You touched to many lives Tito (Uncle) Dolphy. What a privilege it was to personally know you,” added leading Filipino designer Rajo Laurel, also on Twitter.

While he never married, Dolphy was a known ladies’ man who fathered at least 17 children with various women, some of whom also went on to enter the showbiz industry.

President Benigno Aquino rallied Filipinos while Dolphy was on his death bed, calling the actor a “revered icon of the Philippine movie industry”.

Dolphy was rushed to hospital last month due to chronic obstructive pulmonary disorder, which his doctors said was a progressive disease.

A heart bypass 15 years ago had left him perennially weak.