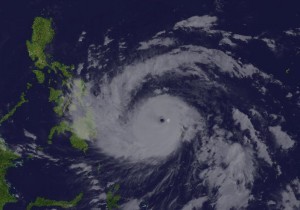 MANILA, November 7, 2013 (AFP) – The world’s most powerful typhoon of the year gained strength on Thursday as it swirled towards the Philippines, forcing mass evacuations, flight cancellations and school suspensions across the disaster-weary nation.

President Benigno Aquino called on his countrymen to make all possible preparations for Typhoon Haiyan, which was generating wind gusts exceeding 330 kilometres (200 miles) an hour and set to hit on Friday morning.

“To our local officials, your constituents are facing a serious peril. Let us do all we can while (Haiyan) has not yet hit land,” Aquino said in a nationally televised address.

“We can minimise the effects of this typhoon if we help each other. Let us remain calm, especially in buying our primary needs, and in moving to safer places.”

Aquino warned areas within the expected 600-kilometre typhoon front would be exposed to severe flooding as well as devastating winds, while coastal areas may see waves six metres (20 feet) high.

Haiyan was expected make landfall on Samar island, about 600 kilometres southeast of Manila, then cut across the central and southern Philippines before exiting into the South China Sea late on Saturday.

State weather forecaster Glaize Escullar said Haiyan was expected to hit areas still recovering from a devastating storm in 2011 and from a 7.1-magnitude quake last month.

They include the central island of Bohol, the epicentre of the earthquake that killed 222 people, where at least 5,000 survivors are still living in tents while waiting for new homes.

“The provincial governor has ordered local disaster officials to ensure that pre-emptive evacuations are done, both for those living in tents as well as those in flood-prone areas,” Bohol provincial administrator Alfonso Damalerio told AFP.

Other vulnerable areas are the port cities of Cagayan de Oro and Iligan on the southern island of Mindanao, where flash floods induced by Tropical Storm Washi killed more than 1,000 people in December 2011.

Authorities said evacuations were taking place in many other towns and villages in Haiyan’s path, while schools were closed, ferry services suspended and fishermen ordered to secure their vessels.

Philippine Airlines, Cebu Pacific and other carriers announced the suspension of hundreds of flights, mostly domestic but also some international.

This made it the world’s strongest typhoon this year, according to David Michael Padua, a meteorologist with the Weather Philippines Foundation, a storm monitoring organization that runs the www.weather.com.ph website.

The Philippines is battered by an average of 20 major storms or typhoons each year, many of them deadly, but scientists have said climate change may be increasing their ferocity and frequency.

The Philippines endured the world’s strongest storm of 2012, when Typhoon Bopha left about 2,000 people dead or missing on Mindanao island in December.

The Global Disaster Alert and Coordination System, jointly run by the United Nations and the European Commission, said nearly 16 million people, including more than 12 million from the Philippines, were at risk from Haiyan.

The others were in Laos and Vietnam, which are forecast to be hit on Sunday, it said on its website.

“Haiyan can have a high humanitarian impact,” it said. 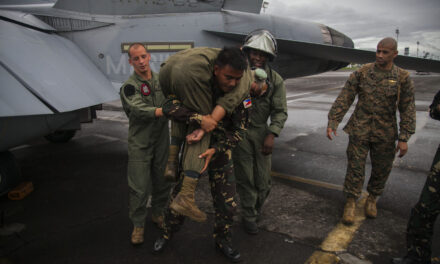 Should Food Waste Go Down the Drain?