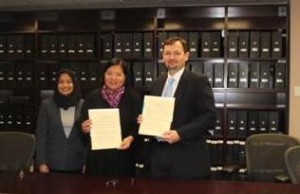 The agreement calls for a collaborative relationship between the two offices to provide Filipino workers and employers in Texas information, guidance and access to resources to promote workers’ rights in occupational safety and health and to ensure that they understand their rights and the employers’ responsibilities under the Occupational Safety and Health Act (OSH Act).

With the signing of this arrangement, the Philippine Consulate General in Los Angeles now has two (2) agreements on the protection of workers’ rights the other one deals with wages and hours.