cultural extravaganza of Philippine traditional dances and music performed by the group PASACAT.

Los Angeles – The Philippines is the featured country at the 34th Lotus Festival held at the Echo Park Lake in Los Angeles from 12 to 13 July 2014.

Thousands of Angelinos flocked to Echo Park, excited to witness a re-invigorated Lotus Festival after a 2-year hiatus. The two-day Lotus Festival kicked-off at noon on 12 July 2014 with a Lion Dance, and City Officials presenting Certificates of Recognition to the Philippines and organizers of Lotus Inc.  This was followed by a cultural extravaganza of Philippine traditional dances and music performed by the group PASACAT.  Consul General Leo Herrera-Lim gave the welcome remarks in the Opening Ceremony.  He said that the Philippines is proud to feature the best of its culture and share its many achievements and economic developments with the rest of California’s Asian Pacific Islander community.  He also thanked the city officials, partners, sponsors and volunteers of the Philippine Consulate General for their support in ensuring the success of the Philippine hosting of the Opening Day Program and the Philippine Pavillion.  Consul General Lim expressed his appreciation to Western Union, Artists Ms. Carminnie Doromal and Mr. Eliseo Art Silva, Historic Filipino Town Group, and the Maranaos in America for Peace, Integration and Advancement (MAPIA).

The two-day event for the public featured 30 different programs with a variety of food booths and vendors selling crafts from the Asia Pacific Islander communities.  Another highlight of the event was a Dragon Boat race participated in by teams representing city government offices and private companies and groups.

The 34th Lotus Festival is organized by the L.A. Lotus Festival, Inc. headed by its President Mr. Leo Pandac and sponsored by the Department of Recreation and Parks (RAP) of the City of Los Angeles to promote arts and cultures of the Asian Pacific Region that coincides with the opening of Echo Park which has undergone rehabilitation works for the past 2 years. 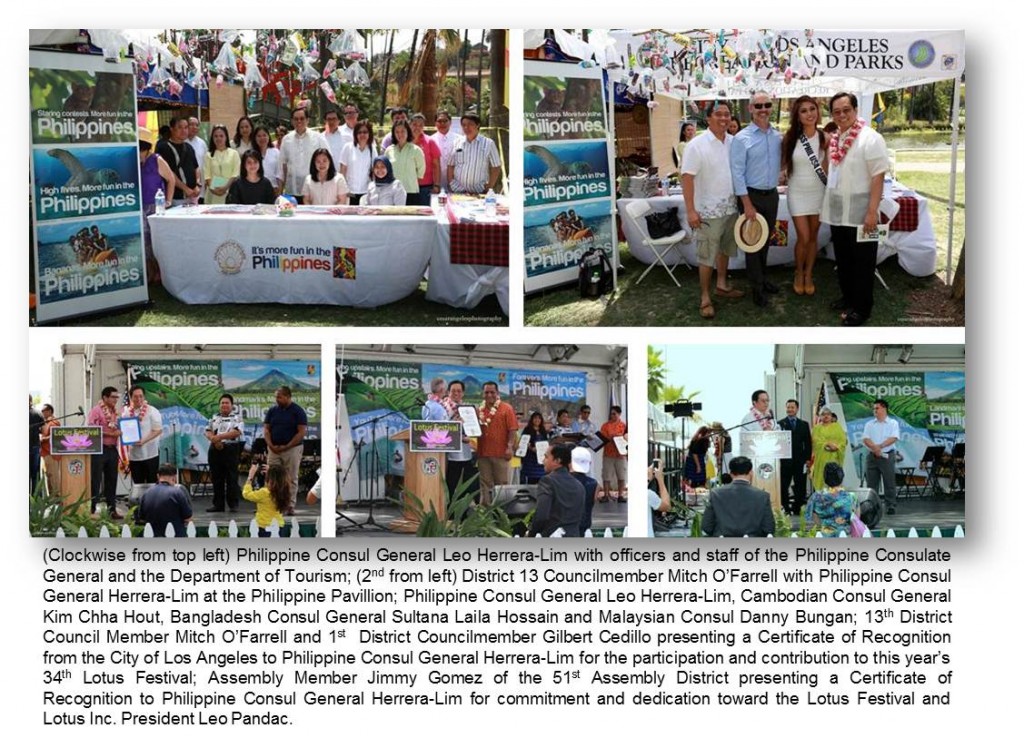 Military points to Bangsamoro rebels as suspect in Kabacan bombing

Waiver still possible after death of a parent