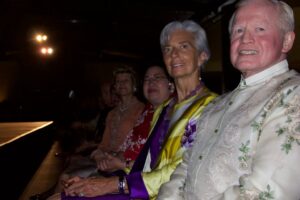 Ms. Christine Lagarde, Managing Director of the International Monetary Fund, celebrates with Ambassador Jose L. Cuisia and his wife Ma. Victoria J. Cuisia during the Gala Evening in commemoration of the 117th Anniversary of the Declaration of Philippine Independence at the Ronald Reagan Building and International Trade Center on 11 June 2015. (Embassy Photo by Ivan Gonzales)

WASHINGTON, D.C.  – “A Gala Evening Celebrating Philippine Design, Textile and Fashion” was a huge success, drawing a diverse crowd of US government officials, members of the Washington diplomatic corps, members of the Filipino-American community, and the general public, and shining light on the fabric and designs that make the Philippines unique.

Guests cheered as they viewed Ms. Tesoro’s collection of some 60 breathtaking pieces made from piña, considered the finest of all Philippine hand-woven fabrics. Ms. Tesoro was given a standing ovation at the end of the show.

“Congratulations are in order! It was such a success! Patis Tesoro is definitely an icon of Philippine fashion design,” said Lucie Patton, Chair of Flower Mart 2015. 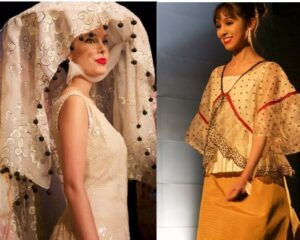 “Kudos to you all for putting on such an elegant yet trendy and fun event! Quite a wonderful nod to the beautiful Philippine community,” said Lydia Benson.

The Gala Event, which was sponsored by the US-Philippines Society, is a testament to the beauty of Philippine fashion, which is continuously getting international attention.

“Philippine fashion has earned world-class recognition, and the US-Philippines Society is pleased to sponsor this Gala as a way to share with you stunning examples of some truly innovative advances in design,” said Ambassador John Negroponte, Co-Chair of the Society.

In his remarks, Ambassador Jose L. Cuisia, Jr. pointed out that since piña production is an age-old tradition in the Philippines, the evening was a celebration of the uniqueness and beauty the country has to offer.

“This Gala Evening is a fitting culmination of a month-long tribute to Philippine indigenous fabrics and the individuals who turn them into exquisite works of art. Piña has long been a symbol of elegance and sophistication, and in many ways is a celebration of the Filipino people’s innate creativity and dynamism in constantly changing times,” said Ambassador Cuisia.

The envoy also dedicated the Gala Evening to the women behind the creation of one of the most exquisite, sought-after handmade fabrics in the world.

Majority of the piña produced in the Philippines comes from the province of Aklan, with numerous families depending on the piña industry for livelihood. In November 2013, Typhoon Haiyan devastated Aklan and seriously affected the piña production.

The Gala Evening was a way for people in the US to help contribute to the preservation and enrichment of the piña industry in the Philippines, as proceeds of the event will benefit Aklan Piña MANTrA, a women-led fiber production microenterprise.

“With your generous support, we aim to give the women of Aklan hope and help them rebuild their lives after Typhoon Haiyan disrupted their main source of livelihood. We dedicate the success of this Gala Evening to them,” the Ambassador stated.

Guests at the Gala Evening were also treated to other designs uniquely Filipino. Also on display at the Ronald Reagan Building were signature pieces by multi-awarded furniture designer and manufacturer Kenneth Cobonpue.

Among the special guests that evening was Ms. Christine Lagarde, Managing Director of the International Monetary Fund.

The Gala Evening was organized by the US-Philippines Society in cooperation with the Embassy. Other partners include the Philippine Department of Tourism, Karma Beauty Lounge by Erwin Gomez, All Nippon Airways, Megaworld, Philip Morris, The Filipino Channel, U.S. Education Finance Group and other sponsors.

Through her work, Ms. Tesoro shares her knowledge of the elaborate piña production process with the belief that knowing how piña fiber is made will help bring the age-old craft to the modern times. As part of her Washington visit, Ms. Tesoro delivered a lecture entitled “The Piña Process” on 12 June at the George Washington University Textile Museum.

Tesoro’s and Cobunpue’s pieces will be on exhibit and open to the public at The Gallery of the Ronald Reagan Building and International Trade Center until July 15.

Marcos admin keen on importing small modular reactors from US