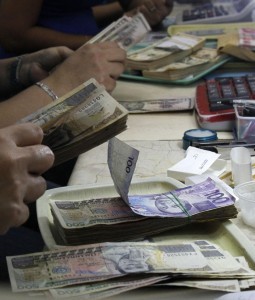 An employee counts Philippine pesos inside a money changer in Manila September 19, 2013. A Philippine official said a weaker peso will benefit Philippine exporters by making their products less expensive and thus more competitive in the global market.

MANILA (Mabuhay) – The Philippine output rebounded sharply in the fourth quarter last year, growing as the second fastest economy in Asia – next to China – for the whole of 2014.

This is on the back of the robust growth of the three productive sectors and the fulfillment of government’s promise to ramp up public spending, the country’s chief economist said.

The Philippines was the third fastest growing economy for the period, next to China’s 7.3 percent and Vietnam’s 7 percent.

As expected, the full-year output is below the 6.5 to 7.5 percent government target for the year.

However, the Philippines posted the second fastest growth in Asia last year, next to China’s 7.4 percent, said Balisacan, who is also the director-general of the National Economic and Development Authority (NEDA).

“Growth in the fourth quarter appears to be broad-based as all three major productive sectors – the agriculture, industry, and services sectors – have shown positive and tobust growth during the period,” he said.

“Moreover, the government stood by its commitment to ramp-up and catch up with its spending as we approached the last three months of 2014,” he added.

In an e-mailed statement, Department of Finance secretary Cesar Purisima said the country’s output in the fourth quarter and for the full year “resoundingly affirm” its upward growth trajectory buoyed by strong macroeconomic fundamentals.

“Despite the challenging external environment in the global economy, both the Q4 and full year growth rates exceeded market expectations, lodging the Philippines firmly among the three fastest growing countries in Asia,” he said.

With the underlying strength of domestic aggregate demand, the Bangko Sentral ng Pilipinas (BSP) may have to reassess economic forecasts, governor Amando Tetangco Jr. said in a text message to reporters Thursday.

“We will refresh our forecasts to include this new development, oil price expectations, shifts in interest differentials and global investor sentiment and assess if there’s any change in the balance of risks to inflation, then formulate adjustments to policy stance as needed,” he said. (MNS)