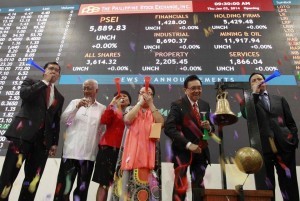 MANILA  (Mabuhay) – Despite the natural calamities last year, higher spending by the government and private sectors to fund the reconstruction of damaged areas will sustain the growth momentum this year, First Metro Investment Corp., the investment banker of the Metrobank Group said Monday.

While the Philippines suffered the devastation wreaked by storms and earthquakes, 2013 was a watershed for the Southeast Asian market economy which gained investment grade rating from the top global debt watchers, Francisco Sebastian, FMIC chairman told reporters in a briefing in Makati City.

“The country has shown resilience, we are still the best performing economy in ASEAN with a 7.4 percent GDP growth in the first nine months of 2013, Sebastian said. “Our fundamentals remain intact and will be able to withstand volatilities in 2014, be it domestic or global,” he added.

“In 2014, the country’s GDP is projected at 7 to 7.5 percent – buoyed by the same growth drivers that continue to fuel the economy plus the robust reconstruction and rehabilitation work in typhoon- and earthquake-stricken Visayas, which will further spur public and private spending,” Sebastian noted.

The economy grew at 7.4 percent on average in the first three quarters of 2013, the fastest among the Association of Southeast Asian Nations.

Inflation, according to FMIC, will register at a manageable level between 3.8 percent and 4 percent in 2014. So far, inflation was 2.8 percent on average in the first 11 months of 2013

The investment bank expected remittances to grow by 6 percent to 7 percent in this year, with more Filipinos who live and work abroad transferring more money to relatives – especially those in the Visayas who bore the brunt of Yolanda.

Basically, remittances will fuel consumer spending and keep the balance of payments in surplus, according to Bangko Sentral ng Pilipinas.

With the US economy seemingly on the road to recovery, FMIC said exports will improved by 6 to 10 percent, and imports will manage to expand by 8 to 12 percent. (MNS)

OnStar on course to save lives