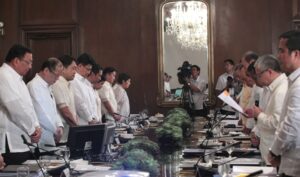 MANILA, May 12 (Mabuhay) — Philippine merchandise exports increased by 2.1 percent to $5.376 billion in March, from $5.268 billion a year earlier, on the heels of three consecutive months of declines since December 2014, the National Economic and Development Authority (NEDA), revealed on Tuesday.

However, Philippine shipments remain in the doldrums year-on-year, considering that exports grew by 12.1 percent in March 2014, data released by the Philippine Statistics Authority showed.