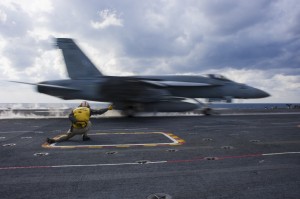 MANILA  (AFP) – The Philippines expressed concern Thursday that China may seek control of air space over contested areas of the South China Sea, after Beijing declared an air defence zone above other disputed waters.

Foreign Secretary Albert del Rosario said China’s announcement of an Air Defense Identification Zone in the East China Sea on the weekend raised the prospect of it doing the same for the South China Sea.

“There’s this threat that China will control the air space (in the South China Sea),” del Rosario said in an interview on ABS-CBN television.

The Philippines, China, Vietnam, Malaysia, Brunei and Taiwan have overlapping claims to parts of the strategically vital and potentially resource-rich South China Sea.

China insists it has sovereign rights to most of the sea, even waters and islands close to its neighbors.

China has been steadily increasing its military and coast guard presence in the sea in recent years to assert its claim, causing diplomatic tensions to rise and stoking concerns in the Philippines about perceived Chinese bullying.

Del Rosario also voiced concern over China’s declaration of the air defense zone in the East China Sea, where it is embroiled in a territorial dispute with Japan.

“It transforms an entire air zone into China’s domestic air space. And that is an infringement, and compromises the safety of civil aviation,” del Rosario said.

“It also compromises the national security of affected states.”

The zone covers Tokyo-controlled islands – known as Senkaku in Japan and Diaoyu in China – where ships and aircraft from the two countries already shadow each other.