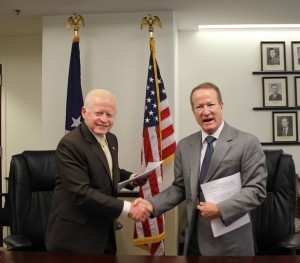 MANILA (Mabubay) – The Philippines received a P795-million boost from the United States for beefing up its land-based and maritime law enforcement and judicial reforms.

A statement from the Philippine embassy in Washington D.C. said the $17.68-million assistance was part of the US’ commitment to bolster law enforcement and and justice sector reforms.

“Both our countries perceive these challenges as common threats and we welcome the opportunity to work with the US government to eliminate these threats that scourge our people,” Philippine Ambassador to Washington Cuisia Jr. said.

The Philippine Embassy said the assistance would be provided under Amendment 3 to the 2011 Letter of Agreement on Narcotics Control and Law Enforcement.

Cuisia and Assistant Secretary of State for International Narcotics and Law Enforcement William Brownfield signed the document at the Department of State on Thursday.

“This Agreement will once again prove to be good to both the Philippines and the United States and for the entire Southeast Asia. With better enforcement and better ability of the Philippines to police its reefs, islands and other claims, the Agreement will be beneficial to the rest of the world,” Brownfield said.

Cuisia said the agreement also allowed funding for the Philippines’ capacity against extrajudicial killings and other human rights cases.

He said the Philippines and US had been working strengthen institutional capabilities in narcotics control and law enforcement since 2003.

The cooperation has since expanded over the last 10 years to include fighting trafficking in persons, child sex tourism and alleged extrajudicial killings.

Cuisia said the funds would support the Global Security Contingency Fund Program, which would prepare the Philippine National Police and Philippine Coast Guard to take on greater responsibility in fighting terrorism and maintaining internal peace and security.

He added the funds would support the Southeast Asia Maritime Initiative project to further develop the capabilities of the Coast Guard and PNP Maritime Group.

Also covered by the agreement is funding for the Law Enforcement Support Project.

The assistance will also benefit the Justice Sector Reform Project that seeks to assist in institutional reform efforts aimed at strengthening the Philippine criminal justice system and providing professional skills training to the justice sector.

Cuisia said the agreement would also fund the investigation, prosecution, and prevention of extrajudicial killings, by enhancing the Philippines’ capacity to address such killings and other human rights cases.

In 2013, the Departments of State and Defense allocated $40 million for GSCF programs for the Philippines.

This supported the capability of the PNP and the Coast Guard on maritime security, counterterrorism and other law enforcement training.

Mangudadatu on Andal Ampatuan Sr.: May he rest in peace