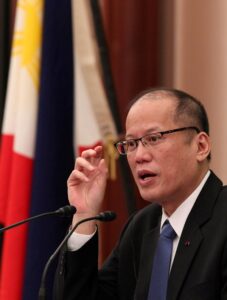 (TOKYO, Japan) President Benigno S. Aquino III delivers his speech during the Press Event with the Japan National Press Club (JNPC) at the Conference Hall of the Nippon Press Center Building on Friday (June 05, 2015) for his State Visit in Japan. (MNS photo)

Regional alarm is growing at moves by China aggressively to stake its claim to most of the sea, including a large-scale island-building programme.

The United States has also urged China and other nations to halt reclamation.

John Kirton, director of think-tank the G7 Research Group, has said maritime disputes between China and its neighbours would be on the agenda of the summit starting Sunday in Germany.

Japan’s Yomiuri newspaper also said Saturday the summit would take up the issue.

Citing sources, the paper said a closing statement would express concern about unilateral attempts to change the status quo in the East China Sea and the South China Sea.

It said no country would be named.

The Group of Seven links the leaders of Germany, Britain, Canada

Asked about the reports, Coloma said that “having talks on achieving a peaceful and orderly settlement of the issue in the… South China Sea corresponds with the position taken by our country”.

He recalled that Aquino had raised his concern in a recent visit to Japan and had also brought it up at a Southeast Asian summit in April and during a tour of the European Union last year.

The waters are also partially claimed by the Philippines as well as Brunei, Malaysia, Taiwan and Vietnam.