MANILA, Nov 29, 2012 (AFP) – The Philippines is still asking China to withdraw three ships from a disputed shoal in the South China Sea almost six months after it promised to pull out, the foreign minister said Thursday.

Foreign Secretary Albert del Rosario said that while the Philippines withdrew its own ships from Scarborough Shoal on June 4, as agreed by both countries, China’s three government ships remained in the area.

“They have three ships in the vicinity right now. They have never really left. We are continuing to ask them to honour our sovereignty and… we are asking them to pull out their ships as agreed upon,” he said.

Government vessels from the Philippines and China began facing off over the shoal in April as both countries pressed their conflicting claims over the islets.

Del Rosario told ABS-CBN television that in an effort to ease tensions, both countries agreed on June 4 to pull out their ships. But while the Philippines kept its commitment, China did not, he said.

He said that in June a Chinese embassy official initially said the weather was too rough for their ships to move but did not say when they would leave.

Chinese embassy spokesmen could not be contacted for comment.

China and the Philippines, along with Brunei, Malaysia, Taiwan and Vietnam, have overlapping claims in the South China Sea, which includes major shipping lanes and is believed to be rich in mineral and oil resources.

The Philippines has become increasingly vocal in opposing China’s claims, raising the issue in international meetings despite Chinese efforts to play down the matter.

Del Rosario said China did not want to “internationalize” the issue by having the Philippines discuss it with other claimants, other countries or even with the press.

“Obviously that is not our position. Our diplomatic tools are very limited and internationalization must remain a viable tool for us,” he said. 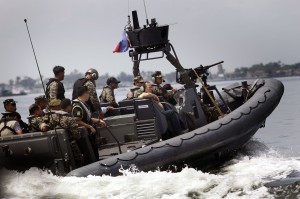 PRESIDENT Benigno S. Aquino III inspects the armament capabilities and the elements of the Armed Forces of the Philippines during the AFP counter-terrorism capability demonstration Friday (Sept. 10, 2010) at the Naval Base Sangley Point, Cavite City. Despite its inferiority compared to China’s naval strength, the Philippines is poised to never back down to China’s bullying tactics in West Philippine Sea (South China Sea). Photo: Jay Morales/Malacañang Photo Bureau/PNA