PHL is in better shape to absorb economic headwinds — IMF 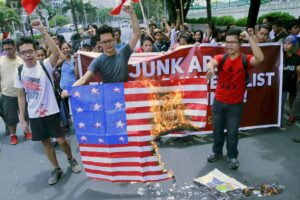 Youth activists burn a mock U.S. flag during a protest in front of the U.S. Embassy in Manila on Friday, denouncing the upcoming Asia-Pacific Economic Cooperation (APEC) meeting. The APEC meeting, which will be attended by 21 world leaders, will be hosted by the Philippines in November. (MNS photo)

MACTAN (Mabuhay) — The Philippines is strong enough to weather any spillover from the China economic slowdown and other external headwinds, according to the International Monetary Fund (IMF).

“The Philippine economy will be less affected by the slowdown in the Chinese economy,” IMF Deputy Managing Director Mitsuhiro Furusawa told reporters while the finance ministers of the Asia-Pacific Economic Cooperation (APEC) are meeting here on Friday.

“The current economy’s performance is quite good compared with its neighboring countries. Its trade relation with China is less than that what other countries have,” the IMF official noted.

The Philippines is also better positioned to weather shifts in the international financial markets, Odd Per Brekk, director of the IMF Asia-Pacific office, said during the same press briefing.

“The Philippine economy is quite robust to withstand developments in the world economy at this point. It has fiscal space and monetary policy to respond to spillovers,” Brekk added. (MNS)