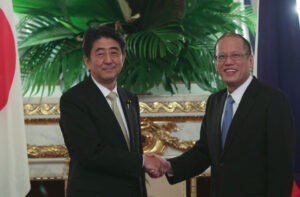 Tokyo, Japan (AFP)  – Japan and the Philippines lashed out Thursday at Chinese land reclamation in the South China Sea, where Beijing is building infrastructure some suspect will be used by its military.

In a joint statement after their summit, Japanese Prime Minister Shinzo Abe and Philippine President Benigno Aquino criticised dredging in the sea, a busy shipping lane, where the United States says Beijing has built 2,000 acres (800 hectares) of artificial islands.

“Both countries reaffirm their strong commitment to ensuring maritime safety and security, including in the South China Sea, which is a vital element for peace and prosperity of the region,” the statement said.

They “share serious concern on unilateral actions to change the status quo in the South China Sea including large-scale land reclamation and building of outposts” in violation of a 2002 regional agreement, it said.

Aquino has passionately courted Japan, along with the United States, to help serve as a counterbalance to China’s claims to almost the entirety of the sea, through which a huge chunk of global shipping passes, and which could harbor oil and gas reserves.

Parts of the sea are also claimed by the Philippines, Vietnam, Malaysia and Brunei.

The statement called for “peaceful settlement” of disputes, based on the law.

The two men agreed ties between Tokyo and Manila “have reached an excellent stage today” and announced an agreement to start negotiations over the transfer of defense technology and equipment. This reportedly includes surveillance planes and radar kit.

Japan will also help boost the capacity of the Philippine Coast Guard, they said, the front line in Manila’s pushback against China, whose territorial ambitions Aquino believes needs to be checked.

On Wednesday he sparked ire in Beijing by comparing it with Nazi Germany in the run-up to World War II.

“If somebody said ‘stop’ to (Adolf) Hitler at that point in time, or to Germany at that time, would we have avoided World War II?” he said in a speech to business leaders.

Tokyo and Manila are shoring up military and political ties, with a joint naval drill last month in the South China Sea. Washington has also sent ships and planes to survey the waters.

Abe has long criticised China’s attempts to change the status quo by force, mindful of Japan’s own territorial dispute with Beijing over islands in the East China Sea that are the destination for Chinese boats and planes.

While ties between Tokyo and Beijing have warmed a little in recent months, including direct talks between Abe and Chinese President Xi Jinping, relations have been icy for years.

Repeated demands for Tokyo to atone for its wartime aggression have irritated the Japanese public, which increasingly believes Beijing is using history as fuel for its nationalist fire and to bolster the ruling Communist Party’s domestic standing.

In contrast, ties between Japan and the Philippines are warm, with Aquino having spoken of Japan’s repentance and praised its decades of pacifism since defeat in World War II.

Japan’s Emperor Akihito told Aquino on Wednesday his country feels “remorse” for its actions during the war.

“During World War II… fierce battles between Japan and the United States took place on Philippine soil, resulting in the loss of many Filipino lives,” he said.

“This is something we Japanese must long remember with a profound sense of remorse,” he said.