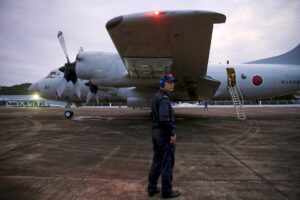 A Japanese P3-C Orion surveillance aircraft prepares to take flight during a joint exercise with the Philippine Navy at an airbase in Puerto Princesa, Palawan on Wednesday. The Philippines is holding separate naval exercises with U.S. and Japanese forces this week, not far from the disputed Spratly Islands. (MNS photo)

But AFP conducts military exercises with Japan in disputed waters

MANILA (Mabuhay) – The joint military exercises between the Philippines and Japan, which included air patrols over disputed areas in the South China Sea, is not an act of provocation against China, Malacañang said Wednesday.

Malacañang issued the statement as Japanese and Philippine military planes once again flew near Recto Bank off the coast of Palawan, which is being claimed both by Manila and Beijing.

“The Philippines has had these exercises before with our strategic partners. It should not be taken as an affront to any other,” deputy presidential spokesperson Usec. Abigail Valte said in a text message.

She added that the Philippines’ joint military exercise with Japan is merely “an expression of cooperation and learning from all those involved.”

On Tuesday, a Japanese P3-C Orion surveillance plane and a smaller Philippine patrol aircraft flew at 5,000 feet (1,524 m) above the edge of Recto (Reed) Bank. Philippine and Japanese military officers supposedly “practiced search and rescue patterns” near the disputed area.

In response to these military exercises, Chinese Foreign Ministry spokesman Lu Kang said relevant parties should not “hype up or even create tensions in the region.”

Japan and the Philippines have earlier opposed Chinese reclamation activities in the South China Sea. The two countries are also plan to enter into a Visiting Forces Agreement to promote greater military cooperation.

Meanwhile, Sen. Francis Escudero said the government should talk with China and even consider backdoor discussions on the sea dispute.

Escudero, together with Sen. Ferdinand “Bongbong” Marcos, had called on Malacañang to start talks with China to find a peaceful solution to the dispute.

On Wednesday, he also reiterated that it is a “foreign policy issue” and Armed Forces chief Gen. Gregorio Pio Catapang Jr. should not be issuing statements about it.

Manila and Beijing have been locked in a territorial dispute over resource-rich parts of the South China Sea over the past years.

China uses the so-called “nine-dash line” to assert ownership of almost the entire South China Sea, while the Philippines uses the United Nations Convention on the Law of the Sea as basis for its claim.

The Philippines, which calls the disputed areas the West Philippine Sea, has already sought international arbitration before a Netherlands-based tribunal to nullify China’s massive claims over South China Sea. Oral arguments on the case will begin next month.

Beijing, however, has refused to participate in the arbitration proceedings, insisting instead on bilateral talks to settle the dispute. (MNS)

Pinoy journalists get together