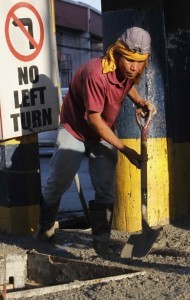 MANILA, Nov 28 (Mabuhay) – The Philippine economy grew by 7.1% in the third quarter this year beating government targets and besting other Southeast Asian economies, a Palace official said on Wednesday.

“Among our neighbors the country’s GDP (Gross Domestic Product) growth was higher than Indonesia’s 6.2%, Malaysia’s 5.2%, Vietnam’s 4.7%, Thailand’s 3.0%, and Singapore’s 0.3%,” Presidential Spokesperson Edwin Lacierda said in a statement during the regular press briefing in Malacanang on Wednesday.

“This impressive expansion from 3.2% in the same quarter last year, places the country’s nine-month growth rate at 6.5% and on track to surpass the 5-6% full year growth target set by the National Economic Development Authority,” he said.

The Philippine economy has shown both resilience and resurgence despite the global economic slowdown, Lacierda said.

Lacierda said the 7.1-percent GDP growth in the third quarter was made possible due to sustained confidence in the leadership of President Aquino who has consistently equated good governance with good economics.

“Underscored by deft fiscal management, responsible and transparent public spending, and a continuously strengthening partnership between government and business has resulted in a virtuous cycle for the Philippine economy,” Lacierda noted.

“Government has also pushed to ensure this economic growth is felt by the broadest number of people. Within the same nine-month period, the Aquino administration has enrolled more than three million beneficiaries under the Conditional Cash Transfer program and has distributed P20 billion for this priority social investment,” he said.

On top of this, Lacierda said, the spending for public health has also increased resulting in an expansion of health care safety nets and improvements in hospitals and health centers all over the country.

“Equitable and inclusive growth is a commitment of the Aquino administration that has prioritized the establishment of both social and physical infrastructure, which continues to redound to a more robust economy for the benefit of all Filipinos,” Lacierda said. (MNS)