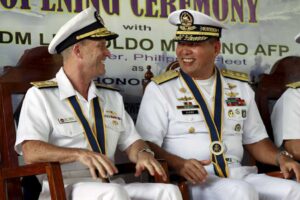 Manila, Philippines (AFP)  – The Philippines said Thursday it wants to acquire defence equipment from Japan, as the two allies strengthen defense ties in the face of China’s increasing assertiveness in the South China Sea.

“Yes, we are interested in getting a P-3,” Peter Paul Galvez told reporters.

“Naturally, we are looking if it will become an excess defence article, then we can get it at a very low price,” he added without giving further details.

Cash-strapped Manila has been strengthening military ties with better-equipped allies such as Japan and the US as tensions have flared with regional superpower China.

Beijing is locked in disputes with several neighbors over its claims to almost the entire South China Sea, where it has started reclaiming land, as well as with Japan over islands in the East China Sea.

The Philippines has conducted naval exercises with Japan and is now pushing for an agreement to allow large-scale joint military exercises similar to those it holds annually with the US.

It has also asked a United Nations tribunal to reject China’s claims to most of the Sea, a move angrily rejected by Beijing which says the world body has no authority in the matter.

The US-designed P-3 plane, which was first released in the early-1960s, serves mainly as a maritime patrol aircraft.

Galvez also said the Philippines was also interested in Huey helicopters, adding these would be easy to “absorb” as the military already has several of the aircraft.

The cash-strapped Philippines has relied on donations of military equipment from its allies such as the US and Australia in the past.

AFP not informed of raid: Gazmin

PH economy on track despite ‘out of control’ inflation: Marcos