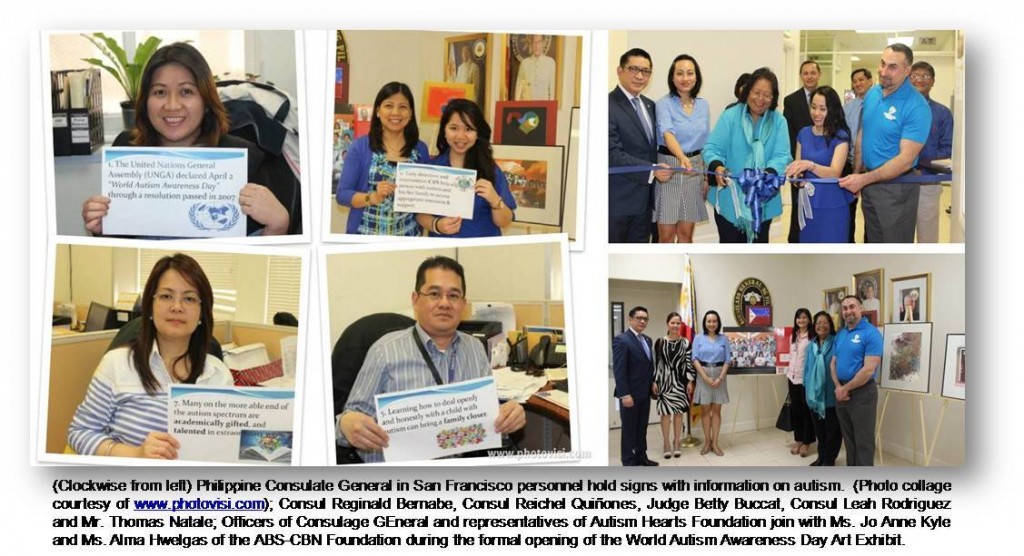 Visitors to the Philippine Consulate General in San Francisco on April 2 were greeted by an unusual sight: all Consulate personnel were attired in blue. At various times during the day, personnel would hold up a sign displaying a fact about autism and autism spectrum disorder (ASD), sharing the information with the Consulate’s transacting public.

The Consulate General’s day-long activity, intended to raise awareness about autism and persons with ASD, was one of two activities it undertook to commemorate April 2 as World Autism Awareness Day, which was adopted by the UN in 2007.

“As always, we support the work being done by Autism Hearts Foundation, and thank ABS-CBN Foundation for their active participation in this project,” Consul Bernabe declared. “The Consulate welcomes, as well, this opportunity to help build awareness about autism spectrum disorder (ASD) and what resources are available to our community to diagnose and treat those with the disorder.”

“Persons with ASD can be valued and valuable members of our community if we understand how they can contribute,” Judge Buccat added. “Early diagnosis is important, as is the appropriate treatment and training.”

For more information on autism spectrum disorder, its diagnosis and resources for treatment and training, the public is encouraged to contact Autism Hearts Foundation, which holds office at Suite 502 in the Philippine Center, 447 Sutter Street, San Francisco. The Foundation may also be contacted via phone at (415) 392-0882, or by email at info@autismhearts.com.

No tax on cash donations from abroad – BIR